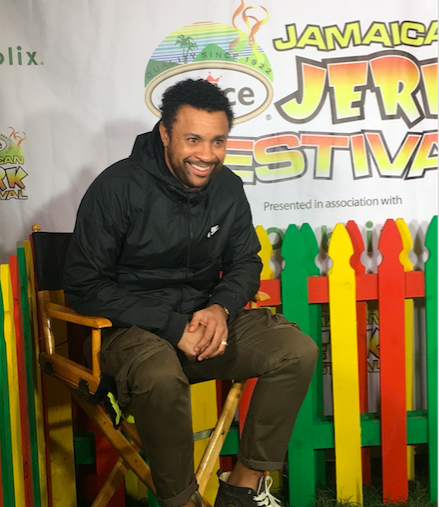 As occurred over the past fourteen years, thousands of patrons, from South Florida and other regions in Florida, the USA and the Caribbean turned out for fun and food at the 15th annual Grace Jamaican Jerk Festival, held at Markham Park in Sunrise on Sunday, November 13.

The event which has grown to become one of the biggest Caribbean events held in South Florida, proved plenty varieties of the Jamaican peculiar spicy jerk meats, including jerk fish, chicken and pork.

Sunday’s event featured a celebrity chef competition where Amateur and professional chefs, celebrity chefs and personalities went head to head to cooking up the best jerk dishes. Included in the lineup was two-time Food Network’s Chopped Champion Chef Andre Fowles, who exhibited his cooking chops with a demonstration at the Publix Aprons Cooking School in Plantation prior to the festival. Also featured was Eddie Jackson former NFL player who also host a cooking show on the Food Network.

A special guest at the Festival was Jamaican sprint Olympic champion Elaine Thompson who was presented by a special proclamation on behalf of the residents of Broward County, by Broward County Dale Holness.

One of the highlights of the night was the $1000 Grace Jamaican Style Patty Eating Competition. One lucky winner went home with $1000 in cash.

Saving the best for last, headlining the signature event was Diamond-selling, Grammy award winning artist Shaggy, who reminded us why he is such a pioneer by singing his hits including “Boombastic” and “It Wasn’t Me.” Shaggy has become a mainstay on stages across the world, thrilling with everything from his early hit “Oh Carolina” to his latest song on the radio, “That Love.”

Miramar resident, Carly Vendries, who was attending the Festival with her family for the 10th consecutive year, said, “Every year I come to the Festival I say it is the best year. But this year was definitely the best based on the organization, the access to food vendors, the provisions made for children who attend, and this year especially the ‘boombastic’ entertainment. I wish the Festival was twice a year instead of once. Big ups to the organizers.”