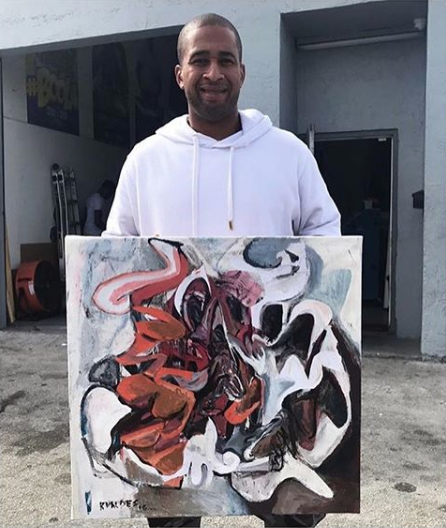 After the unveiling, HIJACK will open for platinum-selling rapper Trina onstage at Rácket Live. The artist will perform his new single featuring GRAMMY-winning artist Pitbull’s deejay of choice, DJ Chino.

The custom wrap collaboration is based on one of Valdez’ original oversized abstract oil paintings.

Standing at over ten feet tall, the canvas combines conceptual forms and figures with vibrant red and brown hues. A longtime fan of Valdes, HIJAK chose the piece to add a bold dose of personality to the  conservatively styled, horsepower heavy, 1965 Chevy Chevelle. HIJAK will tour Art Basel in the vehicle next week making stops at premier exhibitions and events. Follow @hijakmusic and #kikiXhijak on Instagram for the full schedule.

“One thing about me is that you can’t one-box me. Rappers like to be called rappers. I’m more of an artist,” says HIJAK.

It has been a busy season for the singer / songwriter. HIJAK released new music “Vibes”, “New York” and “Hola Bonita” on ITunes, Spotify and Tidal. Born in the Bronx and of Haitian decent, HIJAK grew up listening to the rappers 50 cent and Fabolous. He’d spend hours writing lyrics to his friends’ beats and free-style rapping after school. He started making his own music when he was 18, and shortly thereafter, was discovered by Platinum Group Music Management.

Kiki Valdes, born in 1981, is a Cuban American artist based and from Miami, FL. He studied painting, drawing, and poetry at the Maryland Institute College of Art in Baltimore. He plays with elements of a sort of new Cubism and Fauvism with fragments of figuration combined with abstraction. Kiki Valdes has exhibited his work at the National Arts Club in NY, Art and Culture Center of Hollywood, 101 Exhibit,  Miami-Dade Public Library System and his work is in various private and public collections in North and South America, and the Middle East.