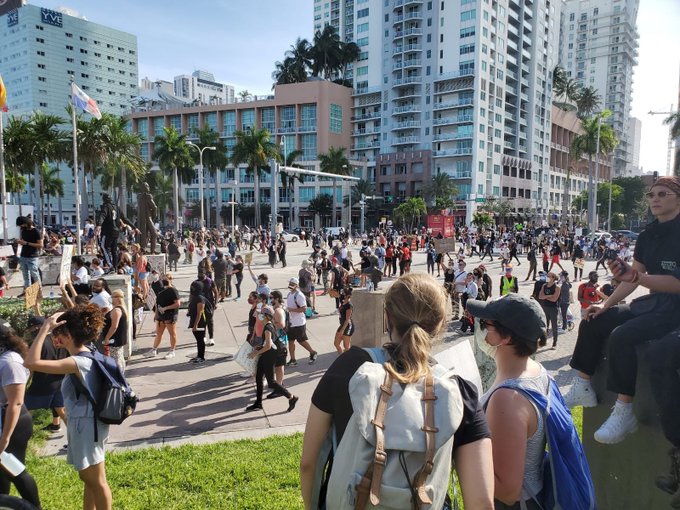 Should protests stop now that the four former Minneapolis police officers have been arrested and charged in the murder of George Floyd?

Horatio, FL – “In no way should we stop protesting. We must protest by any means necessary as we have seen too many times officers either not being charged or be charged and not convicted for their horrible crimes. Stopping now will only allow those prosecuting to see that they can get away with another one walking. The protests outside of the trials also push those in power to make the changes we are requesting. We do not only want convictions we want to change/destroy the systems that make these trials necessary in the first place. Once we see enough of those changes in place, then and only then should we cease.”

Camille – “I honestly think the protesting should stop now because they finally charged the officers that killed Floyd. Well until we see how many years they will have them in prison then I feel like It should officially end because justice was served.”

Amber – “Yes, it should continue…We have not accomplished our goal as yet, we only got a few dirty cops arrested. We need laws to be put in place to make them more accountable for their actions. Some believe it’s better training, I believe it’s accountability and punishment that’s needed.”

Viveca, Miami – “I believe the protests were brought on because of the non-arrests of the other three officers and due to the non-action of the police force. The protests have brought attention to the Black Lives Matter movement and may make a change. But change will only happen if we all, black, brown, white people, and all ethnicity take it upon themselves to be active for the cause. If protests can continue in a peaceful manner and without incidents, then yes, the protest can continue.”

Akeem, FL – “The battle to some may be won but the war is far from over. It takes intense protesting to get four officers arrested and charge in America for what we all know is immoral disgusting. Now the target is the homes—the mindset for those who hear racial discrimination with the comfort of their own families. The protest needs to take a new direction in my opinion. It needs to hit the voting booths. Voting on local government is just as or even more important than the presidential election. Now we need to investigate those we have in place to look out for us and set policies in place that were supposed to protect “us” and see why they failed. We need to vote out those that do not belong and place those in that do. The same next step after bringing awareness (protesting) is taking action… (voting) have several people out there ensuring we are voting for the right person or just ensuring we are registered. To answer the question, no, the protest should not stop and should actually be enhanced.”

DJ Stunna, FL – “Yes, they should continue because this is just a battle within the war. In order to create change in the police force, the disruption should continue until we are pleased. People coming together because the police will continue to racially profile black people. The protests are working and have gotten us results. Protesters are the reason the other officers actually are being held accountable for their actions.”