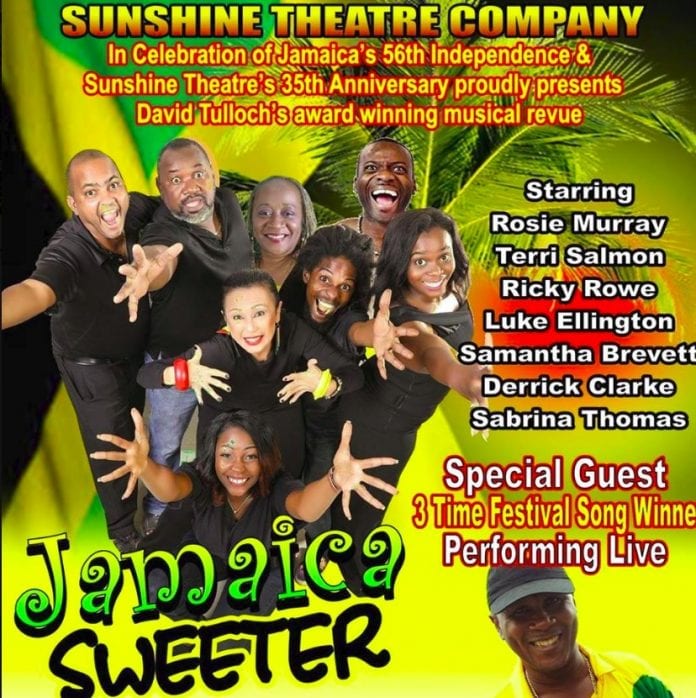 Sunshine Enterprises /Sunshine Theatre Company is one of the oldest promotional and entertainment companies in the South Florida Caribbean community.

The principals, Mike and Jackie Shaw who started their venture started in the 80’s when they promoted Trevor Rhone’s production “Two Can Play” (starring the late Charles Hyatt and Grace McGhie) in Miami. The production was in celebration of “Jamaica 21” at the prestigious Gusman Cultural Center, downtown Miami. The venture was not very successful financially, and Mike vowed never to promote another of these shows. He remembered the Theater Manager telling him if he was truly into theater, when the bug bites you can’t resist. Well, the bug did bite, and soon their next venture was Basil Dawkins’ award winning ‘Champagne and Sky Juice’ which was more successful.

Other successes led to more ambitious projects, including Louis Marriott’s ‘Bedward’ with a cast of 45 people. The success of this project led them to consider presenting the LTM National Pantomime South Florida .  After months of discussion the LTM agreed to the tour South. However, the first visit was filled with problems including cast members not getting necessary visas. It took the concerted efforts of the LTM, the Ministry of Foreign Affairs and the US State Department to make this tour possible.

The pantomime, ‘Schoolers’ was a resounding success and the annual LTM Pantomime became a regular performance in South Florida. Later New York was added to the tours. The changing financial and economic climate of the 90’s however made it increasingly challenging to secure sponsorship, and eventually promoting large productions like the LTM’s pantomime and ASHE Ensemble were curtailed.

Over the years Mike and Jackie have worked with many producers with varying degrees of success,  Shows produced by Basil Dawkins, Stages Productions and David Tulloch have been their most successful and consistent shows, especially those featuring Shebada and Delcita.  Some of the many actors and characters they have worked with and have fond memories of include Miss Lou, Charles Hyatt, Leonie Forbes, Oliver Samuels, Volier ‘Maffie ‘Johnson, Deon Silvera,  Audrey Reid, Winston ‘Bello’ Bell, Michael Nicholson , David Tulloch and Terri Salmon.

Their efforts are not limited to Florida, (Miami, Ft. Lauderdale, West Palm Beach, Melbourne, Orlando, Ocala and Lehigh Acres). They have also promoted the Jamaican culture to other areas of the Diaspora including New York, Washington DC, Maryland (Baltimore, College Park, Columbia) and Atlanta.

Mike and Jackie have received awards from the Consul General of Jamaica for their long dedication and promotion of the Jamaican culture across the Diaspora (which was presented by Prime Minister Bruce Golding). They were also honored with the Consul General’s “Vanguard” award during Jamaica’s 50th Independence celebration. They have also received the ‘Jamaican Milestone Award’ from the Jamaican/USA Chamber of Commerce and Jackie has received a ‘Woman of Excellence award’ from Nostalgia In Gold. She also received an Outstanding Leadership award from the USA Netball Association as President of the Association on leading the USA Team to their first World Championship tournament in Birmingham, England in 1995.

As they enter their 35th year of entertainment and promotion they hope South Floridians appreciate their efforts and their struggles and continue to support them in spreading the Jamaican culture across the Diaspora.

Sunshine Theatre is taking this opportunity to thank all those who have assisted and supported them over these years, especially the sponsors, advertisers, ticket sellers, volunteers and most importantly the many loyal patrons.

Some of the shows they have promoted include the following:

Pablo Hoilette – When the Cat’s Away, Remember Me, The Love List.

David Tulloch/Probemaster – For My Daughter, Prayer Partner, Across the Bridge