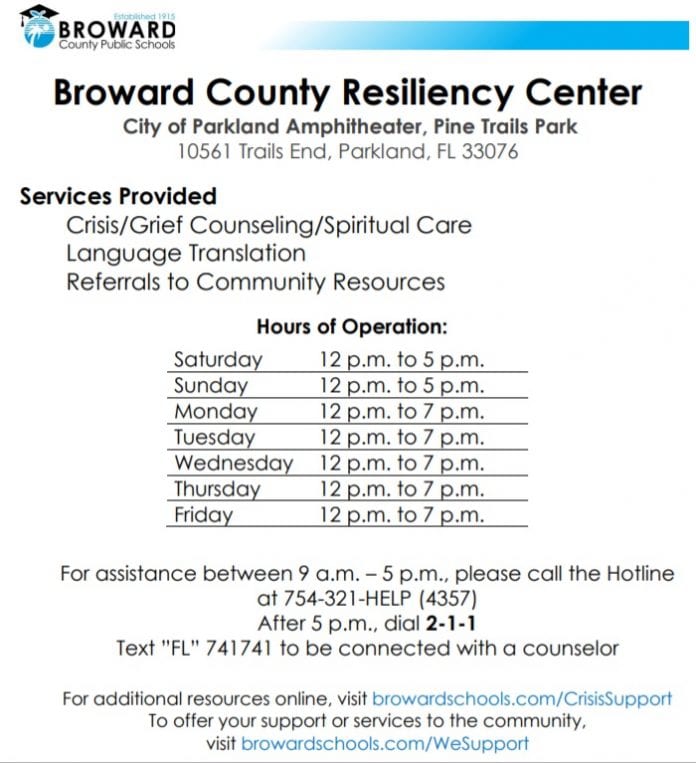 The tragic suicide of a former student and a current at Marjory Stoneman Douglas High School with days of each other has further devastated the community.

Last Friday, March 22, it was made public that former Mason Douglas student Sydney Aiello, 19, a Florida Atlantic University student whose best friend, Meadow Pollack, died in the February 14, 2018 attack at the high school committed suicide. On Saturday, the following day, it was disclosed that another student, not identified, but attending the school committed suicide that day.

Aiello’s mother told a local television station her daughter had been diagnosed with post-traumatic-stress disorder and with “survivor’s guilt” following the school shooting.

Parkland parents, students, teachers and county officials held a gathering on Sunday to discuss providing more support to help students at Marjory Stoneman Douglas and throughout the county cope with trauma and depression.

Resulting from the meeting, a preliminary plan was created for a community-wide campaign to reach and empower parents with tools to help protect their children. The first step is to develop a common message  to enable parents and youth have the same understanding about suicidal warning signs and where to turn for help.

Parents: Talk with your children

Broward County Public Schools in a release said It is important for parents to talk with their children and be able to recognize signs of personal crisis that could lead to suicide. Parents need to ask the screening yes-or-no questions from The Columbia Protocol to identify if someone is in crisis, and they should not worry that asking about suicide will put the idea into their children’s heads. The questions can be found online at cssrs.columbia.edu.

“Schools are closed this week for Spring break, and parents want to know where they can get help for their children during this time,” said Cindy Arenberg Seltzer, CEO of Children’s Services Council, who convened the meeting at Eagles’ Haven in Coral Springs. “When school is back in session, families will need tools to help their children.”

“During the Spring break, I encourage you to take time to speak with your children every day. Dinners are a great time for family conversation,” said Superintendent Robert Runcie. “We need to remove the stigma from talking about suicide.”

Where to get help

Help for students and other faced with depression and suicidal thoughts are available at:

The Broward County Resiliency Center (BCRC) at Pines Trail Park Amphitheater, 10561 Trails End, Parkland, where as clinicians available from noon to 7 p.m. daily until April 1. The BCRC can be reached by calling 954-684-4265.

The Coral Springs Museum of Art, 2855 Coral Springs Drive, where fun activities will be available in a supportive environment.  Call 954-340-5000.

The group will continue to work on the campaign and coordinate protocols for when students return to school after Spring break.