Strong support for Gillum, Nelson and Shaw among Caribbean-Americans 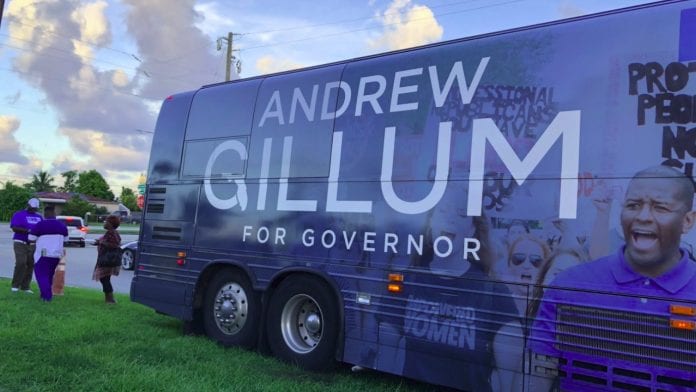 In a few days Florida voters will begin receiving mail-in ballots for the November 6 general elections, and on October 22 early voting begins in most counties, but several Caribbean American voters have already made up their minds, and are ready to cast their votes.

Based on a recently (September 27 to 30) conducted poll on behalf of CNW, there’s evidence of strong support among South Florida Caribbean American voters for the campaigns of Democrats Andrew Gillum for state governor, Bill Nelson’s reelection to the US Senate, and Sean Shaw as the next state attorney general.

The survey conducted among 618 registered voters residing in Palm Beach, Broward and Miami Dade Counties indicated 82 percent (507) of these voters have “firmly” made up their minds whom to vote for in state races in the upcoming general elections.

In the race for governor between Democrat Andrew Gillum, and Republican Ron Desantis, 74 percent indicated support for Gillum, 13 percent for Desantis, and 13 percent undecided.

Although Gillum is African American, who could become Florida’s first black governor, only 23 percent of those who indicated support for Gillum admitted they are supporting him because of his race. Rather, the majority (55 percent) said they are voting for Gillum because he has put forward arguments that supports their social and economic concerns.

“My entire household, and several other friends and relatives, supports Gillum because he seems to understand the basic need of the majority of the people. I like that he wants to increase minimum wage, improve healthcare with a comprehensive plan, and improve education and the safety of our students,” said a Caribbean American in Boca Raton.

On the other hand, among those supporting Desantis, one Miramar voter believes Gillum’s proposals are “Unrealistic pipe dreams. If he’s elected his policies will mean higher taxes for Floridians.”

In the race for US Senate, 69 percent of those polled support  the reelection of Democratic Senator Bill Nelson, 21 percent the election of Republican governor Rick Scott, and 10 percent still undecided.

Shaw in front for attorney general

Democrat Sean Shaw, also an Africa American, is competing against Republican Ashley Moodie to succeed Republican Pam Bondi as Florida’s Attorney General. According to the polls, Shaw  has the support of 64 percent of those polled, with Moodie Receiving 22 percent and 14 percent undecided.

An overwhelming 96 percent of those polled said “they are definitely” voting in the general elections. “I have learned the consequences of not voting from the 2016 general elections” said a Haitian-American resident of Miami Shores. “I will be among the first to cast a ballot when early voting commences on October 22,”

Boost from Puerto Rico’s governor for Gillum and Nelson

Gillum also received a strong boost from another Caribbean source on Monday when Puerto Rico’s governor, Ricardo Rossello endorsed him for governor. Rossello also endorsed Nelson to be reelected to the US Senate.

Rossello’s endorsement of Gillum is supported by the region’s large Puerto Rican community. “We welcome his endorsement for Gillum,” said Marianna Lopez of West Kendall. “Desantis is supported by Trump, who has basically neglected Puerto Rico since Hurricane Maria hit the island last year. We cant trust Desantis.”

Lopez, however, is conflicted over Rossello’s endorsement of Nelson. “Scott has been a good supporter of Puerto Rico since the hurricane. He has visited often. But I think I will vote for Nelson as he has been in the Senate for years,”

Rossello admitted it was tough deciding whom to endorse for the US Senate race. He told the Orlando Sentinel “I really respect and value Gov. Rick Scott and everything he’s done for Puerto Rico,” but he also said, “I believe in Sen. Bill Nelson.”

In endorsing Gillum, Rossello cited Gillum’s support for Puerto Rico’s quest to become a US state.

The Caribbean American voting bloc, including English-speaking Caribbean immigrants, Haitians and Puerto Ricans are traditional registered Democrats. However, in past elections, the turn-out of this bloc have not been up to expectation. If, as the CNW poll indicates, the turn-out among Caribbean-Americans is high in the upcoming elections it augers well for Democratic candidates on Florida’s ballot.