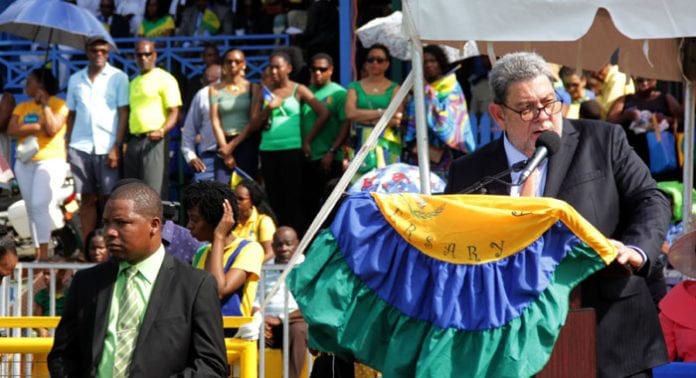 KINGSTOWN, X. St. Vincent, CMC – St. Vincent and the Grenadines nationals were on Monday observing the 40th anniversary of political independence from Britain with Prime Minister Dr. Ralph Gonsalves announcing an increase in the monthly payout to welfare recipients as well as the payment of money owed to health care workers.

St. Vincent and the Grenadines gained independence on October 27, 1979, and with the 40th anniversary coinciding with Sunday, the holiday to mark the occasion is being observed on Monday.

Prime Minister Gonsalves in the address in which he made 20 announcements told the nation “I don’t want you to be thinking when you hear 20 that Ralph is about to call election” constitutionally due in March 2021.

But there has been widespread speculation that the poll could be called earlier and that his independence address could be the last before the elections.

“Our profound commitment to the poor continues,” the prime minister said, adding that he expects that next year, the National Insurance Services will increase the minimum pension “appropriately after the usual review”.

Nurses are also to receive outstanding payments and Prime Minister Gonsalves said that at least 112 nurses and nursing assistants who were due certain on-call and weekend allowances would be paid in full in December, totalling EC$995,332.56.

“I thank the nurses who brought this matter to my attention three or so months ago. I am pleased that we are righting this wrong. At the same time, I will like to remind all our nurses and nursing assistants who are doing a very good job of their ongoing obligation to deliver the best service possible to the various communities. Please do not let us down. You are very precious to us.”

Prime Minister Mitchell said that graduate teachers, public servants are to be appointed and that the final batch of teachers — just under 100 — who obtained university degrees but were not appointed as graduate teacher will be so appointed.

“Henceforth, the appointment will proceed as a matter of course upon their acquisition of degrees,” he said, noting that the teachers had been receiving graduate allowances.

“The education revolution has occasioned a massive increase in university graduates. The Public Service establishment has to be reformed to accommodate this welcomed development in university training.”

Prime Minister Gonsalves said that in this the 40th year of the nation’s independence, hundreds of land title issues for grantees of lands will be resolved to ensure the receipt of proper title.

“More distribution of housing lots will take place, too, as the land surveys and requisite infrastructure are done,” Gonsalves said, noting that the government has so far distributed or recorded title for more than 4,500 housing lots and that Cabinet had last week approved nearly 200 titles to state lands.

He said 139 formal letters regarding these land titles will be distributed individually on Monday.

“We shall continue to turn dead property into live property. We shall assist our nationals always in putting a roof over their heads.”

Prime Minister Gonsalves said that the six million dollar Public Access to Village Enhancement (PAVE) will begin soon adding “all over our country, on our rugged terrain, scores, dozens of footpaths will be built over the next year as a 40th anniversary gift to occupiers of their homes in pursuit of easing of access.”

Meanwhile, over the next two months, the Medical Cannabis Authority (MCA) will provide EC$1.3 million in assistance to traditional marijuana growers who have been licenced to transition into the legal cannabis industry.

Gonsalves said that the MCA will also provide educational, health and rehabilitative support in the sum of EC$200,000 to assist drug addicts.

In his address, Prime Minister Gonsalves said that Taiwan is providing a shipment of 5,160 of sacks of fertiliser that will be distributed to farmers at highly subsidised prices to boost further agricultural production.

He said a grant of 40 sacks of fertiliser will be given to each of the 16 registered agro cooperatives.

“Notice the symbolism of 40. We have to big up the farmers,” Gonsalves said, announcing also that the physical infrastructure of the judicial system and parliamentary democracy will be strengthened through a US$20 million soft loan from a Taiwanese bank.

He said the funds will be used to construct a modern parliament building and courthouse complex.

The prime minister also announced that the duty free concessions of parcels and barrels this year will run from November 18 to December 31.

The government said it will also fund a project that will allow for a comprehensive history of St. Vincent and the Grenadines to be written by four local historians.

Gonsalves said that during the 40th year of independence, a final determination will be made in time for national Hero’s Day 2020 — March 14 — for the elevation to the state status of national hero of one or more of persons.