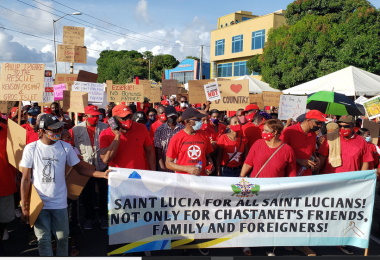 The main opposition St. Lucia Labour Party (SLP) says it is pleased with the turnout on Sunday’s protest march and is hinting at the possibility of taking legal action following the government’s decision to successfully table the COVID-19 (Prevention & Control) Bill in the Senate last Friday.

The legislation is expected to be passed given the government’s majority and will remain in effect for two years.

“We are examining all our options, including legal action,” Opposition and SLP Leader Philip J Pierre told reporters ahead of the national protest march that coincided with the end of the State of Emergency (SOE).

The controversial bill was passed in the Lower House last Tuesday but opposition and independent legislators stayed away from the Senate last Thursday preventing its passage in the Upper House.

But on Friday, three new senators were appointed, two of which temporarily replaced the independents Mauricia Thomas and Adrian Augier, thereby facilitating the passage of the bill.

Augier had earlier issued a statement saying “the legislation at hand has profound, immediate and direct impact on the private sector and in our view, requires input from those likely to be most affected.

“Our voice is not a solitary one in that regard. At least two civil society institutions of some standing, have written to communicate their significant discomfort,” Augier said, making reference to the St. Lucia Bar Association and the association representing hoteliers.

“We suggest, therefore, that it is in the best interest of both the government and the governed to speak with each other before proceeding with any undue haste. The result should be a more sustainable outcome for all concerned.”

Augier said that the last time independent senators requested a deferment there was Indeed due cause and that the “faulty legislation had to be withdrawn, redrafted and returned for affirmation.

“I close by stating unequivocally that our interest here is unambiguous: that any legislation brought to the House should represent, both in form and substance, the paramount interests of people and country.

The government has argued that it broke no laws in ensuring the passage of the legislation in both Houses of Parliament with Prime Minister Chastanet acknowledging that the government and the opposition were at odds as a result of the appointment of the senators.

But he noted that despite all the criticism, this was a very proud moment for him and all St. Lucians.

“Eight of the persons occupying the senate Friday, six of them are women and what’s most amazing is the contributions these women are making,” said Chastanet.

However, Pierre told reporters the SLP would be meeting with its legal team because it believes that the government behaved in a dictatorial and vindictive manner.

“There was no need for the prime minister to rush with that bill, even after he was asked for consultation by civil society groups with absolutely no link to the St.ucia Labour Party,” Pierre said, adding that St. Lucians must put a stop the current administration.

“This country is a democracy, it is not a kingdom. The prime minister cannot believe he can do whatever he wants and from today when the Prime Minister disobeys, we going to put people in the streets,” Pierre said.

Hundreds of supporters, some of whom were clad with masks took advantage of a long holiday week end, and travelled from all corners of the island to participate in the protest.

The SLP said that it was pleased St. Lucians “have spoken,” by the turn out adding “you know that you deserve better, you know that we cannot continue to be ill-treated by this government.