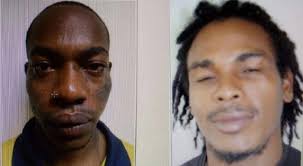 A Saint Lucian murder convict is among two ‘dangerous’ escaped prisoners being hunted by law enforcement authorities in Guadeloupe.

The Saint Lucian has been identified as 31 year-old Henry Reagan.

Reagan was serving a life sentence for killing a fifty year-old man in Martinique, according to local media reports.

The Saint Lucian murder convict and 32 year-old Vincentian, Peters Orvel, are believed to have escaped from the Baie-Mahault prison at around 4.am Tuesday.

Orvel had been sentenced to 12 years in prison in Fort-de-France on charges including armed violence and sexual assault.

According to local media, the two men managed to pull the bars out of the window of their cell and escaped by crossing a barbed wire fence.

They were spotted by a guard who raised an alarm as they fled, it was reported.

Local authorities have said that the two escapees should be considered dangerous given their criminal record.

They have called on persons who have information in relation to the whereabouts of the escaped convicts to call: 05 90 99 67 10.

Law enforcement authorities believe that the men will seek to leave Guadeloupe.