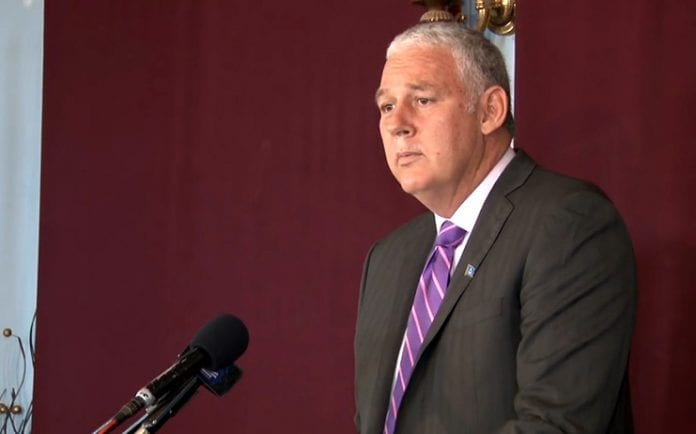 CASTRIES, St. Lucia,  CMC – On Tuesday, St. Lucia Prime Minister Allen Chastanet defended his decision to meet with United States President Donald Trump on the ongoing economic and political situation in Venezuela, saying “at the end of the day I was elected by St. Lucians to represent St. Lucia.”

Chastanet, along with Prime Minister Andrew Holness of Jamaica, his Bahamas counterpart, Dr, Hubert Minnis and the President of Haiti, Jovenel Moise held a two-hour meeting with Trump in Florida last Friday.

Meeting criticized by other Caribbean leaders

St. Vincent and the Grenadines Prime Minister Dr. Ralph Gonsalves described the recent meeting between Trump and the four Caribbean leaders as “troubling” saying there was no true representation of the CARICOM grouping given that its current chairman and St. Kitts-Nevis Prime Minister Dr. Timothy Harris had not invited to the meeting.

But Chastanet, who came to power in June 2016, told reporters he did not share Gonsalves’ concerns that the meeting was “troubling”.

“I don’t, at the end of the day I was elected by St. Lucians to represent St. Lucia,” he said, adding that the topics discussed were of national and regional importance.

He told reporters that the meeting was not a gathering for CARICOM, adding “this was a meeting by invitation by the President of the United States of America”.

He said that the United States is this island’s largest trading partner, St. Lucia’s largest diaspora and the country that offers St. Lucia the greatest opportunity for growth.

“So, if I am invited to put forward St. Lucia’s agenda, I will do so,” Chastanet told reporters, adding that he has always been ‘extremely respectful’ and will continue to be respectful on CARICOM’s positions.

But Chastanet asserted that CARICOM is ‘very divided’ on the Venezuela issue as evident in the way members of the organization voted at the Organization of American States (OAS).

The Caribbean leaders invited to the meeting with Trump had in January supported the OAS resolution in not recognizing President Maduro’s second five-year term. The four countries joined members of the Lima Group that has been opposed to Maduro.

Chastanet said this is not the first time that CARICOM leaders and CARICOM countries have held different positions on issues.

He reiterated that St. Lucia believes for Venezuela to be able to ‘get on with its life’, there must be fresh elections.