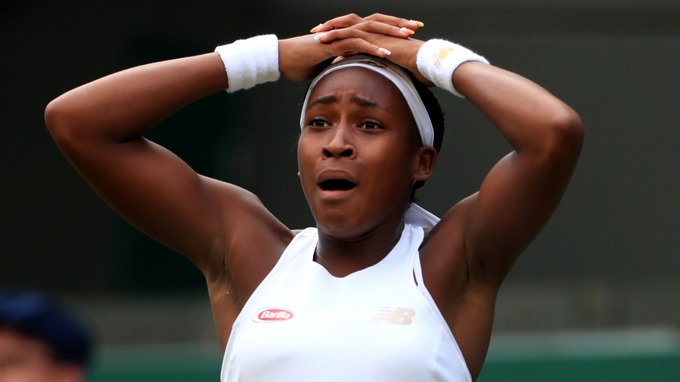 WIMBLEDON, England – Since yesterday, July 1, the name Cori “Coco” Gauff has been trending on social media and grabbing headlines on traditional media globally.

The media frenzy is well deserved as Gauff, a 15-year-old resident of Delray Beach, South Florida, soundly defeated her idol, tennis icon Venus Williams, 39, in two sets – 6-4, 6-4 in the women singles first round at the Wimbledon tennis tournament in England.

Gauff, an African-American, is the youngest ever competitor to qualify to play at Wimbledon in the professional era. Entering Wimbledon she was ranked 313 in the world, and although she has been playing impressively this year, she was considered to be there just for the experience.

Judging from her shocked reaction after defeating Williams, who Gauff said along with her sister Serena were her tennis idols and motivators, not even she expected to defeat Venus.

After securing her victory, Gauff placed her hands on her head as in disbelief. She then met Williams, also a South Florida resident from Palm Beach Gardens, at the net where she was congratulated by the five-time Wimbledon champion. Gauff, in turn, told Williams she was her inspiration, she was the reason why she was playing at Wimbledon, and “thanked her for everything she did.”

Those, including her parents, who have witnessed Gauff’s progress in the sport in recent years expect her to excel on the international circuit.

Born on March 13, 2004, Gauff started playing tennis at the age of seven. She grew up in Atlanta but moved to Delray Beach, Florida to have better opportunities to train in tennis. Her father, Corey Gauff, played basketball at Georgia State University and her mother, Candi, was a track and field athlete at Florida State University. She has two younger brothers. Gauff is home-schooled by her mother, a former teacher.

Like her idols Venus and Serena Williams in their youth, Gauff is coached by her father. She has trained with Gerard Loglo at the New Generation Tennis Academy in Delray Beach, Florida. When she was 11, she was selected by Serena Williams’s coach Patrick Mouratoglou as part of his Champ’Seed foundation and trained with him in Nice, France.

Gauff made her ITF debut in May 2018 as a qualifier into the 25K event at Osprey, where she won her first professional match. At age 14, she won her first Junior Grand Slam Title in June 2018 at the French Open.

In September 2018, she won the Girls’ Doubles at the US Open with her partner Caty McNally. Gauff finished 2018 strong by winning the Girls, 18 and under, division of the Orange Bowl International Tennis Championships.

At the 2019 Miami Open, she recorded her first WTA match-win against Caty McNally. In the second round, she lost to Daria Kasatkina. On 27 June 2019, she won her third qualifying round at Wimbledon to reach the main draw, becoming the youngest person to qualify for Wimbledon in the Open Era.

In Monday’s match at Wimbledon, before 12,000 spectators including her parents, Gauff showed no signs of nerves as she took to the court. She played like an experienced professional through the two sets trading powerful groundstrokes at the baseline with Williams.

Williams rallied well in the second set to bring the score to 4-4, but Guaff kept her nerves and regained the upper hand with two brilliant forehand shots which Williams was forced to volley. She maintained her composure and on her fourth match point in the final game forced Venus to forehand into to the net, and won her historic first match at Wimbledon.

In a post-game interview, Gauff said she never she would have won and “I’m literally living my dream right now.”