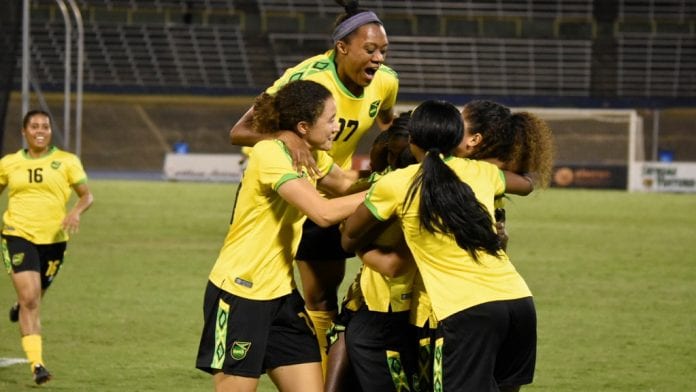 A robust lineup of festivities is slated for next week as the South Florida community will be feting the history-making Reggae Girlz, as the first Caribbean team to qualify for a FIFA Women’s World Cup.

The trailblazing squad will be off to France for the competition, which will be held June 7 to July 7.

Their South Florida stop is dual purpose celebration aimed at both showering the team with good vibes before their departure, and raising funds to the tune of $50,000 to ensure the Girlz are properly resourced during the tournament.

Hosted by the City of Miramar, Jamaica’s Consul General Oliver Mair, and the Reggae Girlz Foundation, the five-day roundup of events will begin this coming Monday, May 20 and wrap up on Friday, May 24.

On Monday, May 20 the team will arrive at the Fort Lauderdale International Airport for an official South Florida welcome that the public is being invited to support.

Then, on Tuesday, May 21, Miramar’s Vice Mayor, Alexandra Davis, will be hosting a closed Sports Summit to discuss the business of sports with a variety of community leaders and key stakeholders.

A pep rally will be held on Wednesday, May 22, hosted by the County Line Chiropractic. The rally, plus meet and greet, is free and open to the public, and will be held at 21309 NW 2nd Avenue in Miami Gardens.

Thursday, May 23 will mark the biggest event of the series – the Reggae Girlz 2019 World Cup Send-Off Fundraiser “Fun-Day Celebration”. This event will feature double header matches – the Reggae Girlz versus FC Surge USA, as well as a celebrity match with Jamaicans entertainers, such as Chris Martin, Agent Sasco, Papa San, and others, versus popular Haitian entertainers. An after-party will then be held at the Reign Club, 9940 Pines Blvd, Pembroke Pines.