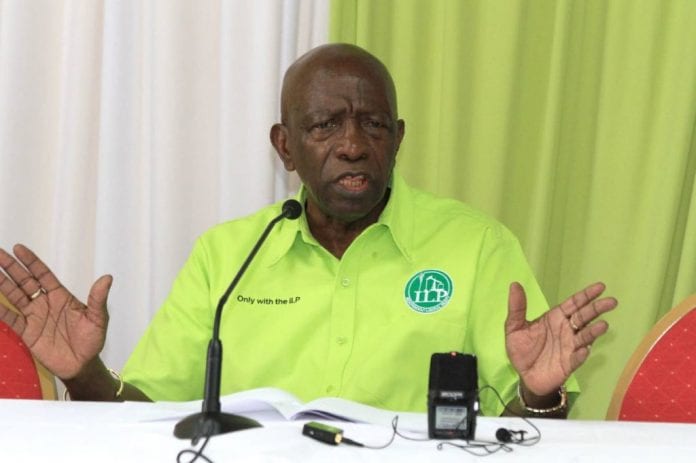 PORT OF SPAIN, Trinidad – The minor opposition parties failed to make any impression in Monday’s general election that the People’s National Movement (PNM) said it won, with at least two leaders indicating that they would be bowing out of elective politics.

Leader of the Independent Liberal Party (ILP) Austin “Jack” Warner, who lost the Lopinot/Bon Air West constituency to the PNM’s Marvin Gonzales, said he given it his “best shot” and while disappointed he was not bitter.

“I thought I would have made a difference in their lives. All I can hope is in the next five years they don’t suffer in any serious way for the errors which they have made today, this perseverance with the PNM and UNC (United National Congress),” said Warner, the disgraced FIFA vice president who is fighting extradition to the United States where he is facing several fraud related charges arising out of his tenure with the international football organisation.

The leader of the Progressive Empowerment Party (PEP), Phillip Alexander, who had predicted that his team would have won a significant number of seats, on Monday night threw in the towel.

“We knew it was going to be a herculean task. Everyone assumed Trinidad would have been a little bit more ready. Tuesday morning, everybody who voted are going to wake up in a country that’s still not working…Now that the promise season is over and the reality season is here, I worry for my country,” said Alexander, whose PEP had nominated 26 candidates, the third highest among the 19 political parties that contested the elections.

The Movement for Social Justice (MSJ) leader David Abdulah said the party had achieved its objective of “coming out stronger as a party” as it contested its first general election.

Abdullah lost the Point-a Pierre constituency that was regained by the UNC’s deputy political leader, David Lee and Abdullah said that the party would not fade away.

“While we have not won, we are unbowed, because we believe that the issues that confront the country – the economic crisis, the social problems and so on – tomorrow will be very much the same,” Abdullah said.

The Congress of the People (COP), which had entered the elections holding the St. Augustine seat, said despite its failure to win any of the four seats it had contested, the party, which between 2010-15 had formed part of the coalition People’s Partnership government, is still confident of being a third force here.

“For the sake of democracy, for the sake of the view that our population needs to be educated about the rights of citizens, and trying to bring a balance back to Parliament, we felt we should make a go at it, understanding we were going up against teams that were well-oiled and well-financed,” said COP chairman, Lonsdale Williams.

The leaders of the New National Vision, Fuad Abu Bakr, Kirk Waite of the NOW Party and the leader of Progressive Party (PP), Nikoli Edwards, failed to muster 100 votes between them in the three constituencies they contested.