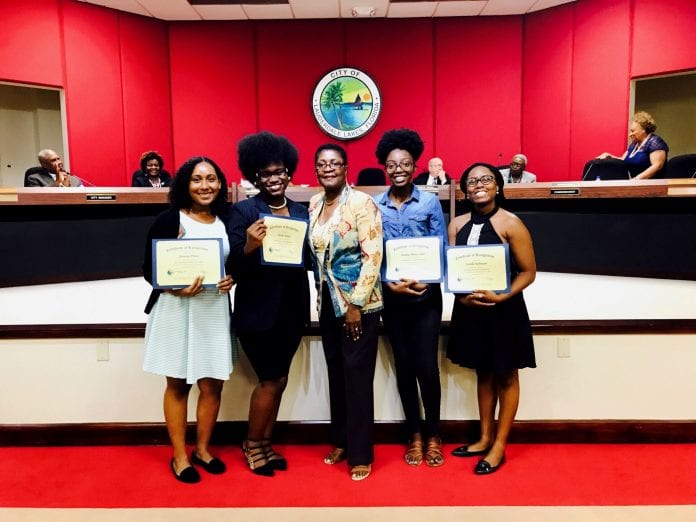 The City of Lauderdale Lakes presented seven students with the Sam Brown Scholarship fund at a City Commission Meeting recently.

The City of Lauderdale Lakes’ Samuel S. Brown Scholarship Fund provides senior high school and college students residing in the City with financial assistance for educational opportunities.  Named in honor of former Mayor Samuel S. Brown — a passionate supporter of higher education — the scholarship is funded and awarded annually at the Commission’s discretion.

This year the scholarship was given to Camille Robinson, Taisha Saintil, Annessa Prince, Jadyn Holliman, Stephanie Leonard-Jose, Tatiana Pierre-Louis, and John Rincher. These students met the criteria to be considered and awarded the funds and should be considered among the elite scholars in the City and Broward County area.

“We are extremely proud of our scholars every year and look forward to witnessing them excel as successful adult citizens.,” said Mayor Hazelle Rogers.

Criteria included being a resident of Lauderdale Lakes for one year before and after application, being a high school senior or a current college student in good academic standing, and the student must be accepted or enrolled in an accredited college or vocational program and the tiebreaker community service hours to name a few.

Samuel Brown was a Jamaican born resident of Lauderdale Lakes who became the cities first Caribbean American and black Mayor. He was a student of the Calabar High School in Jamaica.