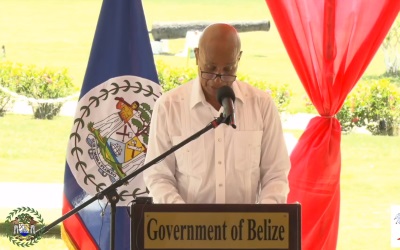 Prime Minister Dean Barrow Monday bid farewell to Belize as he prepares to step down from active politics and insisted that he would not “respond in kind” to the clear campaign speech of the Opposition Leader John Briceno at an Independence Official ceremony.

Instead, Barrow said he was positive that the country would emerge from the coronavirus (COVID-19) that has killed 19 nationals and infected 1,536 others to date, a better and stronger country as it plots its future socio-economic development.

He told the ceremony that Belize would be seeking assistance from the international community including the International Monetary Fund (IMF) and the World Bank in the future, adding it would hope that the “not be the normal times conditionalities that are punitive and would hamper, rather than empower recovery.

“Fortunately those that control the levers of international power and the global economy seem to get it. Already in the citadels of planetary decision making the calls are growing for a post-pandemic order that will pay special attention to equitability and the needs of countries such as ours.

“There is a recognition of worldwide interdependence, notwithstanding the asymmetries of size. There is an acceptance of the imperative for differentiated treatment of small states, there is the embedding of the humanising needed to curb the inequalities of the old regime”.

Barrow, making his final Independence Day speech as head of government, told the audience that included Briceno, that in the end Belize’s ultimate triumph “will depend mostly on Belize itself.

‘Our recovery, our tourism and agriculture, manufacturing and servicing rebound will oblige us to work harder than ever, make more sacrifices than ever, most particularly we will now be mandated to deploy in fullest measure those innate talents that Belizean capacity which we proudly possess in demonstrated plenty”.

He told the ceremony “I leave with the certain knowledge that we can do it, that we will prevail because our leaders…operate on the basis that is vision, cooperation, dedication and faith in divine providence that will bring us safely to harbour”.

Earlier Barrow was critical of those persons whom he said had failed to adhere to the measures put in place to prevent the spread of the coronavirus.

But he praised the health authorities and other stakeholders for helping flatten the curve to the point that schools were now reopening and preserving jobs.

He said the government “is fronting” seven million dollars (One Belize dollar=US$0.49 cents) to purchase tablets for students as well as bandwidth and axillary services.

“The loans are at low-interest rates, partially subsidised by the government,” he said, while “pointing to our proud record of comprehensive outreach and social protection during the pandemic.”

Barrow said he was thankful to all the bilateral and international partners, including Cuba and Taiwan, adding “I say this is proof positive that the government acted with a  comprehensive purpose from the outset to deal with the economic fallout from the crisis”.

But, earlier, Briceno, who acknowledged that the country was dealing with the “worst pandemic’ in recent history, also reminded the country that a general election is due in November and urged the population to remove the ruling United Democratic Party (UDP) and replace it with his People’s United Party (PUP).

He said the elections will provide an opportunity for Belizeans to ‘decide if we want to live in a country where we will say no to corruption and cronyism, no to lawlessness, crippling poverty, no to mismanagement and incompetence.

“We must decide if we want a fairer more prosperous nation where everybody wins or if we want more of the same. The work ahead will not be easy, our challenges will be great, but each generation must keep working to build the nation we deserve to live in,” he added.

Briceno said every Belizean with the guidance of “our creator, we will build a Belize that works for everybody.

“We believe this is possible just as we believe everybody will win. Belizeans at home and abroad we say “Long Live Belize,’ Happy Independence Day”.