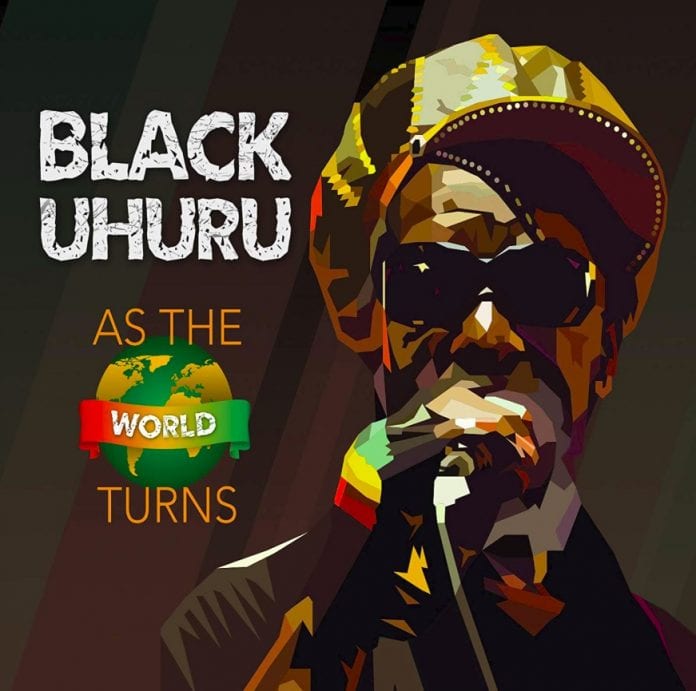 For the first time in 15 years, legendary godfathers of reggae Black Uhuru have returned to the studio to record a new album, “As The World Turns.”

“As The World Turns” captures the band’s best, passing the torch even as Black Uhuru’s flames continue to burn strong. Featuring original songs and strong cameos, it is one of the first times in years Duckie Simpson, iconic founder of the band, has stepped out in front, his earthy, soulful baritone guiding the record.

To support the album, the band is headed on a East Coast US Tour with stops in major cities New York, Washington DC, Philadelphia, & Boston. Plans of a West Coast Tour will be in March 2019.

“As the World Turns” carries on a powerful legacy of conscious roots reggae that started in Kingston and continues around the planet. From humble beginnings, Black Uhuru won the unsurprising honor of being the best-selling reggae act in history–second only to Bob Marley and the Wailers.

They toured with the Rolling Stones and the Police, then bust down the barriers all on their own, barriers that have too often kept reggae stars out of the American mainstream. Several of their albums sold tens of millions of copies, including the GRAMMY-winning Anthem. The BBC called them “THE name to drop.”

Among first to incorporate dub

Black Uhuru was one of the first bands to seriously incorporate dub elements into their songs, with its undulating, up-front bass lines, and this album tips the hat to this approach. It also highlights other key reggae styles and sounds like dancehall (with help from heavyweight dancehall DJ Agent Sasco) and roots (Prezident Brown).

They pay tribute to lost lights, adding new flavor to Peter Tosh’s classic ode to hope, faith, and Jah, “Jah Guide,” along with Bob Marley tunes (“Stand Alone” and a version of “African Herbman” called “Jamaica Herbman”) and a take on the Clash’s version of Junior Murvin’s “Police & Thief.”

In the end, there was one main factor that drove Simpson back into the studio, that keeps him on stage. “It’s the music, I’ve seen good music and made good music,” reflects Simpson. “This type of music still linger, and that is why I’m still here.”

The album was recorded half in California and the rest in Jamaica. Most of the production was done by Horace “King Hopeton” Campbell at his Double Lion Studio who tours with the band on keyboards.

Leebert “Gibby” Morrison studio in Jamaica was used to overdub and voice the backing vocals by Nikki Burt. The album was mixed by Jermaine Forde who tours as the band engineer and Jay Edge William at Ajang Studio and the album was mastered at Music Works Anchor Recording Studio in Kingston. Band agent Mike Gener along with Derrick Simpson are the Executive Producers.

The album was released September 7th on all major platforms and distributed by Independent Distribution Collective based out of San Francisco.

“Whether the fans were new to their music, like me, or decades old die-hard fans, everyone was grooving. … The music brought the funk, but the theme of the night was clear: we are to love and look out for one another. I was impressed by the musicianship as well as the uplifting message. Black Uhuru was not a show to miss!” –KEXP