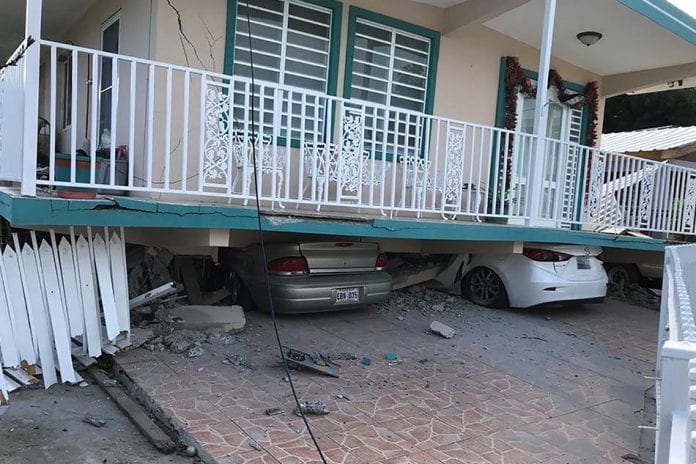 According to the US Geological Survey, the earthquake was felt at 5:32 a.m. ET, about 8 miles south-southeast of Indios, Puerto Rico, at a depth of about 3.7 miles below ground.

As of Monday evening, no major injuries or deaths were reported, Puerto Rico Director of Emergency Management Carlos Acevedo said. He said some homes were damaged in Guanica, and a home collapsed in Guayanilla. Some victims of the earthquake posted photos of deep cracks in walls.

After the 5 AM earthquake, a major 4.9-magnitude tremor was felt in the same area of Puerto Rico just before 11 a.m., according to the USGS.

Acevedo said that Monday’s quake was the strongest since the first in a series of earthquakes jolted the island on December 28. That 4.7 quake was followed by a 5.1 magnitude one that also hit near Puerto Rico’s south coast and another 4.2 magnitude one Dec. 31. The island was also hit by a 4.5 earthquake on January 2, 2020. USGS geophysicist Amy Vaughn said the island is in a seismically active area, but a 5.7 magnitude quake is “a larger event for the region.”

Since December 28, more than 1,100 earthquakes have been recorded in the region, most of which have not been felt.

On January 2, a 3.0-earthquake was felt in the Mona region of Kingston, Jamaica. On December 30, an earthquake with a magnitude of 3.9 rattled parts of Dominica and the French islands of Martinique and Guadeloupe. Several days before, other minor quakes were also felt in the Eastern Caribbean and Haiti.