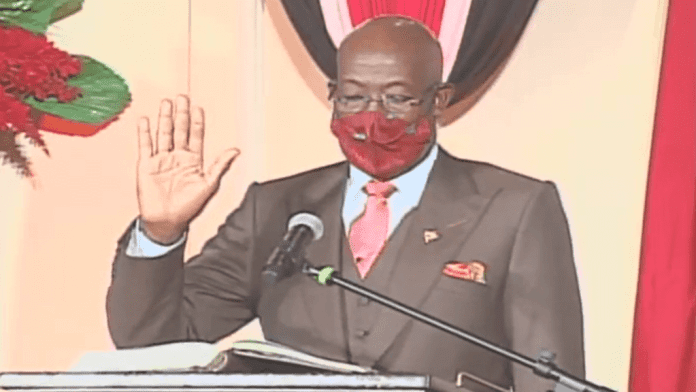 PORT OF SPAIN, Trinidad – Prime Minister Dr. Keith Christopher Rowley was today sworn into office for a second consecutive term at the head of a 22-member Cabinet, promising to implement policies aimed at significantly changing the socio-economic conditions in Trinidad and Tobago.

Rowley, who led the ruling People’s National Movement (PNM) to victory in the August 10 general elections over the main opposition United National Congress (UNC), unveiled a cabinet consisting of young and experienced politicians such as returning Finance Minister Colm Imbert, the Minister of Energy and Energy Industries, as well as the Minister of Planning and Development, Camille Robinson-Regis and Attorney General Faris Al-Rawi.

Among the new faces in the Cabinet is Brian Manning, the son for the late former prime minister Patrick manning, who will serve as Minister in the Ministry of finance.

Rowley told the new Cabinet members that their tenure is best counted as 60 months, rather than years, adding “sometimes when you count this period in years, some people fall asleep.

“Rest assured that nobody in this government will be allowed to fall asleep because …performance will be reviewed on an ongoing basis (and) as Prime Minister I assume full responsibility and I want to thank the national community for giving me another opportunity to continue in public service.

“I want to give you the assurance, your Excellency that all my colleagues will observe the Oath of Office taken here today and to conduct the business of the people of Trinidad and Tobago in keeping with that oath”.

Rowley said that the new Minister of Foreign Affairs, Dr. Amery Browne, who replaces Dennis Moses, will be sworn in at a later stage since he is in quarantine after having returned to the country from his diplomatic posting in Panama.

He said the appointment of Dr. Nyan Gadsby-Dolly as the Minister of Education with Lisa Morris-Julian as the Minister of State in that Ministry, underscores his administration’s intention to radically revamp the education sector here.

“I ask the national community to take note of the fact that I have put the nation’s children in the hands of two mothers and I trust that they could not be better placed,” he said adding that the two ministers will not only be responsible “for their own family but for the family of the children of Trinidad and Tobago”.

He said the most ‘significant assignment he would expect to be carried out during their tenure “is a radical reform of the country’s curriculum from primary school and into secondary school.

“Without waiting for the outcome of such reform I will publicly ask that these ministers ensure whatever revision is done, whatever reform comes about that the whole question of citizenship, which used to be called civics be added to the curriculum of Trinidad and Tobago so that our education system, whatever else it does it prepares our people for citizenship”.

Rowley said that a similar strategy will be employed regarding the agricultural sector with the intention of also getting young people into farming and the further support for those farmers already in the sector.

He said the new Ministry of Youth Development and National Service will also place emphasis on young people and announced the return of youth camps in the country.

In her brief address, President Paula Mae Weekes said the electorate has returned the immediate past government to power affording it the opportunity “to continue, complete, re-direct and where necessary correct plans and policies even as it conceives and executes new initiatives.

“Many long standing matters remain to be addressed, among them Tobago self-government, constitutional reform and racism,” she said, promising to speak on the racism issue “in the near future”.

She said there are recent issues on the front burner such as the coronavirus (COVID-19) and illegal immigration and new ones will emerge “as the Republic marches boldly into this d4ecade.

“To say that the electorate repose its trust in its representatives to mitigate or solve these issues might be hyperbolic,” she said noting that voters had elected their representatives, “but let us not ignore the fact that while some exercise their franchise enthusiastically many did so out of a sense of duty, unhappy with the alternatives on offer, perhaps feeling the pressure of Hobson choice, yet others declined to vote”.

She said she did not want the country to forget for a moment that at this time Trinidad and Tobago “cannot be said to be a country at peace with itself”.

She said that the new ministers had taken an oath to serve conscientiously and to the best of their abilities, adding “this is your touchstone and you will be judged unsparingly”.

The following is the full list of the new Cabinet.

Randall Mitchell – Minister of Tourism, Culture and the Arts

Avinash Singh – Minister in the Ministry of Agriculture, Land and Fisheries

Lisa Morris-Julian – Minister in the Ministry of Education

Brian Manning – Minister in the Ministry of Finance

Adrian Leonce – Minister in the Ministry of Housing and Urban Development

Ayanna Webster-Roy – Minister in the Office of the Prime Minister

Stuart Richard Young Minister in the Office of the Prime Minister

Symon de Nobriga – Minister in the Office of the Prime Minister

Foster Cummings – Minister in the Ministry of Works and Transport.