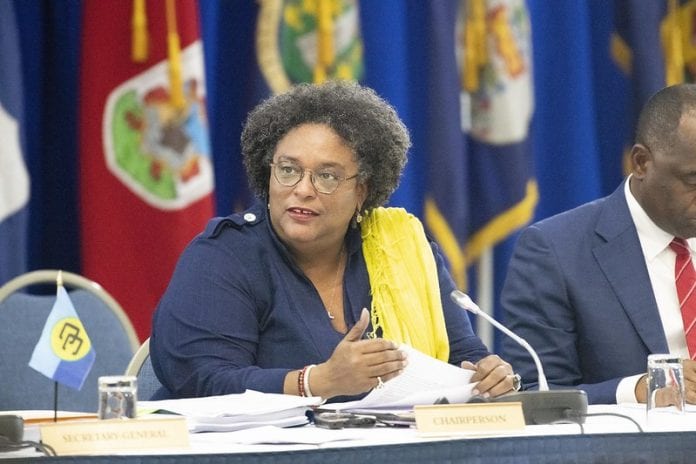 GEORGETOWN, Guyana – Barbados Prime Minister Mia Mottley, Friday said it is “regrettable” that the people of Guyana are still awaiting the official results of the disputed March 2 regional and general election in the country.

“Without saying more and doing more I want to say that we have tried to play our role by ensuring that we are there for members of the Community by being able to send in electoral observer teams, we sent them in Suriname, we sent them in St. Kitts-Nevis and in Guyana’s case we sent in two teams”.

She said apart from the electoral observer team, CARICOM had also sent in a high level team to Georgetown after five CARICOM leaders visited the country “when it was clear that there was not going to be an easy ride for the declaration of a result from the March 2 elections.

“It is regrettable that today, the third of July there is still no clarity as to the conclusion of that electoral process, but we have said what we have had to say on that matter and we await the ruling of the Caribbean Court of Justice (CCJ), but we also know that we have a duty to support one another”.

The Trinidad-based CCJ, Guyana’s highest court, will rule on July 8 whether or not it has jurisdiction to hear an appeal filed by two senior members of the main opposition People’s Progressive Party/Civic (PPP/C) in relation to a Court of Appeal ruling regarding the disputed March 2 regional and general election in that country.

Guyana’s Opposition Leader, Bharrat Jagdeo, and Irfaan Ali, the PPP/C presidential candidate filed the appeal before the CCJ for several reliefs, including an interpretation of the words ‘more votes are cast’ in Article 177(2)(b) of the Constitution of Guyana.

The PPP/C has said that it won the elections based on the national recount of votes that ended on June 9. But the ruling coalition, A Partnership for National Unity (APNU) has said that the polls were filled with irregularities and anomalies and wants it annulled.

Mottley told the summit that Guyana has a bright future and it must also have a future that makes every Guyanese a winner.

“We trust and prayer that we are in a position as a family to work together, but we cannot ignore principles when it is inconvenient to stand by them.

“I say enough on that matter at this stage and I look forward to us being able to resolve this as a family and to ensure that the values which we reflect as a Caribbean Community are those values which our founding fathers enshrined for us and which we continue to hold dearly because these are the values that make the definable difference to the kind of democracy that we need to have that is different from the…kind of exploitative history that the Caribbean was forged in after its modern settlement,” Mottley added.