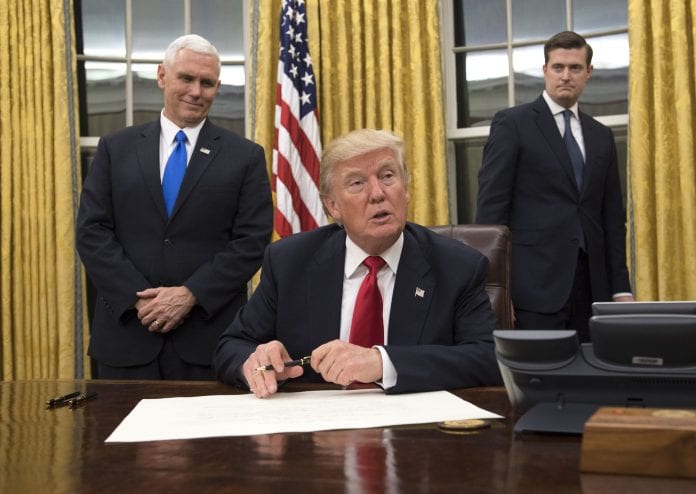 President Trump firm on his vow to repeal ‘Obamacare’

As a first order of business, newly sworn in President Donald Trump on Friday signed an executive order aimed at limiting the “burden” of the Obamacare health law that he vowed to repeal during his campaign.

During the signing in the Oval Office, Trump’s chief of staff Reince Priebus described the order as aimed at “minimizing the economic burden” of the 2010 Affordable Care Act, “pending repeal.”

According to Republicans, and their view, Obamacare — which aimed to ensure healthcare for the millions of Americans who are unable to get covered by public insurance, or by their employers marked a costly drift toward socialized medical care.

The healthcare law has managed to add more than 20 million people onto insurance plans, lowering the national percentage of Americans without coverage from 16 percent in 2010 to 8.9 percent last year.

The president has said the law should be repealed and replaced “simultaneously,” a stiff challenge given the complexity of America’s vast health care system.

Republicans are pledging a repeal of Obamacare and rapid votes on a replacement bill in order to prevent gaps in coverage and reassure a restless insurance industry.

Half of all Americans are insured through their employers, according to the Kaiser Family Foundation, while about seven percent are covered through the so-called individual market, which serves those who are self-employed or are employees without coverage through work.

Obama’s solution rested largely on requiring that everyone be insured, and providing federal subsidies to those who cannot afford coverage. Republicans deemed the first requirement too coercive, and the latter too costly.