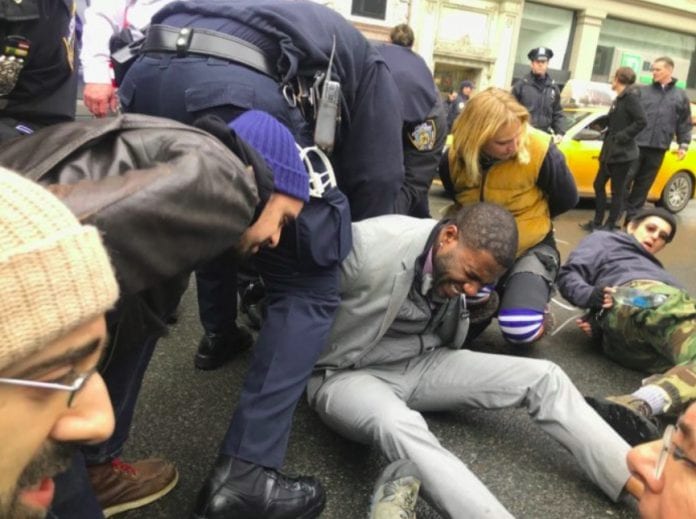 A Caribbean American legislator, Jumaane D. Williams, is to begin trial in New York today July 31 on charges related to his arrest while trying to stop what he describes as “the unlawful detention and imminent deportation” of Trinidadian immigrant rights activist Ravi Ragbir.

The New York City Council member who is the son of Grenadian immigrants, will go on trial in New York County Criminal Court in Manhattan.

Williams, a candidate for New York State Lieutenant Governor who represents the predominantly 45th Council District in Brooklyn, was arrested on January 11, along with17 others, including New York City Council Member Ydanis Rodriguez, as he protested the detention and imminent deportation of Ragbir outside the Jacob K. Javitz US Federal Building in lower Manhattan.

In March, he pleaded not guilty to charges of obstructing an emergency medical vehicle stemming from the January protest.

Rodriguez appeared in court appearance late February and pleaded guilty to disorderly conduct, which is a violation rather than a crime.

The arrest and detention of Ragbir was later ruled unconstitutional by US District Judge Kathleen Forrest, who compared the US Immigration and Customs Enforcement’s (ICE) actions to “regimes we revile as unjust; regimes where those who have long lived in a country may be taken without notice and sent away.”

Williams said he intends to continue to raise issues of immigrant rights, deportation, Immigration and Customs Enforcement (ICE) abuses, and sanctuary cities throughout the legal process.

Ragbir, who is the executive director of the faith-based immigrant rights group New Sanctuary Coalition of New York City, was taken into ICE custody when he showed up for a routine check-in with ICE at26 Federal Plaza in lower Manhattan.

Police began making arrests when protesters declined to move onto the sidewalk.

Ragbir, who was convicted of wire fraud in2001, was released from ICE detention on January 29 after Judge Forrest ruled it was “unnecessarily cruel.”

He was granted a stay of deportation in February after his legal defense team successfully argued that he should be allowed to remain in the US while a lawsuit regarding his detention is considered in court.

The suit alleges Ragbir was targeted by ICE because of his immigrant activism.