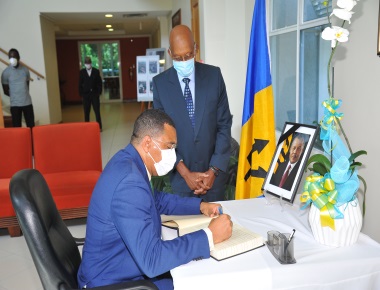 Apart from Holness, the other leaders signing the book at the regional headquarters of The University of the West Indies (UEWI) were Opposition Leader, Dr. Peter Phillips and former prime minister P.J. Patterson.

Arthur, 70, died at the Queen Elizabeth Hospital on July 27 and his body will lie in state in Parliament Buildings in Bridgetown on Wednesday and Thursday.

“During this time, mourners will file past the closed casket, and sign the condolence books, which will be available on both days,” the Barbados government said, announcing also that he will be buried after a state funeral on Friday.

Arthur, who was also a professor at the UWI, leaves to mourn his wife and two children.