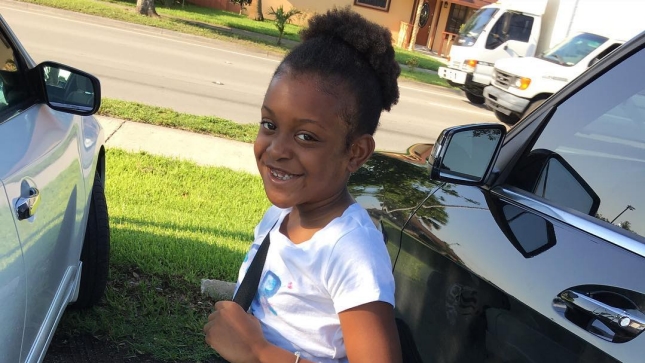 Despite calls from Miami Dade officials including county Police Director Juan Perez and School Superintendent Alberto Carvalho for information, there has been no arrest in the Aug 28 shooting death of 8-year old North West Miami resident Jada Page.

Page was one of four victims who succumbed to gun violence over the weekend of August 27 when four people including Page were killed. Page was the victim of bullets from unknown assailants as her father accompanied her to a Sunday movie on the evening of August 28. Her father was also shot, and is recovering.

At the vigil, responding to the frustration of residents over the relentless incidents of gun violence, Perez called upon residents, parents and relatives of gang members and shooting victims to let the police know what is happening if they sense trouble. He told the community gathering, “If you see something, say something. Call the police before it happens.”

Superintendent Carvalho expressed frustration about the shootings, which has frequently involved public school students, and the unwillingness of residents to cooperate with police investigations. He said the people who have information about the shootings, but are not giving it to the police “are as guilty as the shooters.” He said in ridding the community of the “bad seeds” residents must be more responsible in cooperating with the police.

Miami City officer, Mike Martinez, decries what he calls a “code of silence” prevailing the region where people are reluctant to give information on crimes, particular gun related crimes. “After these crimes we go through the affected communities giving out fliers and interview residents coaxing them to give information, but, whether through fear or other reasons, the information is hardly forthcoming. Not even cash rewards are helping.”

The Miami-Dade police has offered a reward of $25,000 to anyone with information that could lead to an arrest in Page’s killing, but no one has come forward to date.

In the opinion of Cassie Jackson, Caribbean-American resident of the Northwest Miami neighborhood where Page was shot, “the youth with guns are so dangerous, people are afraid to contact the police and give information. I understand the police believe residents are not cooperating in giving information regarding these shootings, but they should understand we are afraid of reprisals from these gunmen.”

On Labor Day, residents of the community staged a rally on the eve of Page’s 9th birthday. They again pleaded for those who have information about the child’s killing to contact the police, and also demanded the shooters to turn themselves in. Valencia Garner, rally organizer and Page’s Godmother says the family is convinced “the killers are out there, and people know who they are.”

Anyone with information should call Miami-Dade CrimeStoppers 305-471-8477.