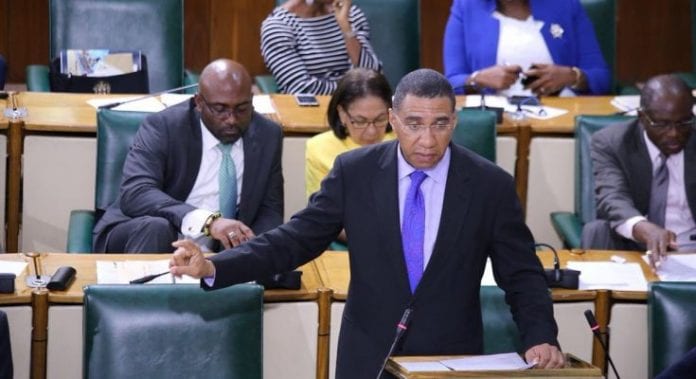 KINGSTON, Jamaica – In his new year’s message to the nation, Prime Minister Andrew Holness said that while his administration is committed to bringing the homicide rate down, the level of crime in the country is too much for the current national security ministry to handle.

“The level of crime we are now experiencing is over and above the capacity of our existing security apparatus to manage. While the crime and murder numbers have grown over the past four decades, successive governments have not increased the national security budget apace, or kept abreast with technology, or increased the number of investigators and other critical capabilities commensurately, or effectively controlled corrupt activity in the force,” the prime minister said.

In the article by the Jamaica Observer, Holness said that it is only in this last decade that serious policy and legislative reforms have been undertaken and that “all Jamaicans should take hope that, with sound policy, programmes and plans we can reduce murders”.

However, he stressed that it will take a long-term concerted commitment to stick with the plan.

Furthermore, he said political disunity has not helped with the crime problem. “Gamesmanship over crime-fighting and national security policy have real effects on our lives,” he said, arguing that the lack of support from the Opposition for the continuation of the states of emergency had resulted in a break for the first four months of 2019, and an unusual spike in homicides in November.

At the same time, he expressed confidence in the Government’s plan to secure the country.

“Jamaica is engaged in building a national security architecture fit for the times that will deal with domestic threats, but will also deal effectively with our air and maritime space and borders, in addition to securing our cyber domain which is becoming more important as the world becomes digital. All of this cannot be done overnight or even in two years. It takes a year and a half to procure equipment, at least two years in some cases to draft and pass legislation, several years to train up a seasoned investigator and other skilled law enforcement operators,” said the prime minister. He said much of this is now being done and the Government will be intensifying efforts to bring these reforms and investments more quickly to fruition.

In a December 30 statement, the Private Sector Organisation of Jamaica, Jamaica Manufacturers’ and Exporters Association, and Jamaica Chamber of Commerce reminded the political directorate that dealing with the issues related to the safety and right to life of our citizenry is non-negotiable. “We ask every Jamaican to join us in holding Government and Opposition accountable and demand the removal of partisan agendas on this topic,” the organisations stated.

Holness noted that in the new fiscal year the largest allocation of $5.28 billion will go towards equipping the police force with cutting-edge technology to enhance its ability to detect, record, respond and prevent crimes.

“The JCF [Jamaica Constabulary Force] will receive the first set of purpose-built police cars fitted with tracking devices and onboard computers,” he said, adding that the police’s radio and communication system is being improved, and that the implementation of the long talked about electronic station diary will begin.

Along with administrative and operational improvements, already the country is seeing the impact on the number and quality of cases being brought before the court to secure convictions, he told the nation.

He noted that there were also record tourism arrivals and earnings, launch of the tourism workers’ pension fund, as well as major road and infrastructure development.

In addition, he pointed to the increased suite of benefits under the Programme of Advancement through Health and Education, and the merger of the HEART Trust, Jamaica Foundation for Lifelong Learning, National Youth Service, and the Apprenticeship Board, to create a comprehensive and effective human capital development agency.