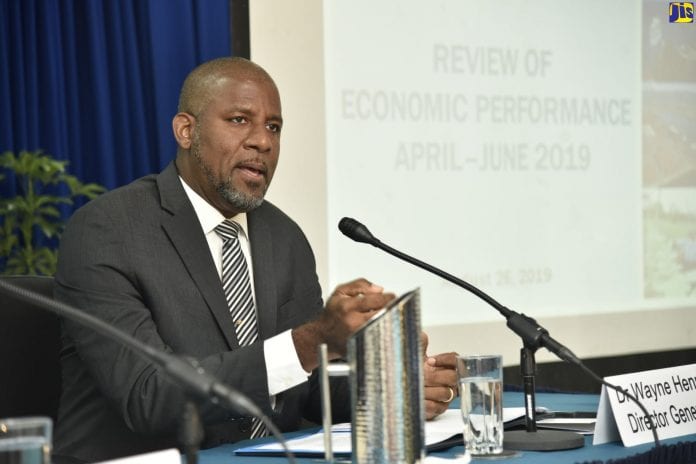 The Planning Institute of Jamaica (PIOJ) is reporting that the economy contracted by an estimated 18 per cent for the April to June quarter, relative to the corresponding period last year.

Director-General, Dr. Wayne Henry, in his quarterly report on Wednesday, said the out-turn was largely due to the impact of the coronavirus (COVID-19) and measures implemented to contain its spread.

He noted that there was weakened consumer demand associated with lower income due to job losses and reduced work hours and continued slowdown in construction-related activities.

According to the Director-General, the goods-producing industry contracted by an estimated seven per cent, with activities in the services industry declining by 20.6 per cent.

He noted that all goods-producing subsectors declined, with mining and quarrying recording the greatest reduction of an estimated 25.2 per cent due to lower alumina production outweighing increased bauxite output.

The closure of the JISCO Alpart refinery has resulted in lower capacity utilisation within the mining and quarrying industry.

In addition, the agriculture sector declined by 8.5 per cent; manufacturing, 2.9 per cent; and construction, three per cent.

As it relates to the services industry, four of the five subsectors declined, with hotels and restaurants falling by 87.5 per cent.

Henry said that this out-turn reflected a sharp decline in visitor arrivals resulting from the closure of Jamaica’s borders to incoming passenger traffic for two of the three months during the quarter, and decline in the number of persons utilising restaurant services.

“This led to a significant falloff in stopover arrivals by 98.9 per cent to 7,188 visitors. Total visitor expenditure, at US$16.2 million, was 98.1 per cent lower than that recorded in the corresponding period of 2019. Restaurant services were also negatively impacted by measures implemented to stop the gathering of persons as well as the curfew implemented, which led to a reduction in opening hours,” the Director-General said.

The other subsectors contracting were transport, storage and communication, down 29.6 per cent; wholesale and retail trade, repair and installation of machinery, down 20 per cent; electricity and water supply, down 8.8 per cent; and finance and insurance services, down three per cent, with producers of government services remaining flat.

The six-month out-turn for January to June is for the economy to contact by an estimated 10.2 per cent, and by between eight and 10 per cent for the July to September 2020 quarter, largely due to the impact of COVID-19.

The Director-General said the PIOJ estimates that the 2020/21 fiscal year will contract within the range of eight to 10 per cent.

However, gross domestic product [GDP] levels are not anticipated to recover until two years after the pandemic,” he noted.