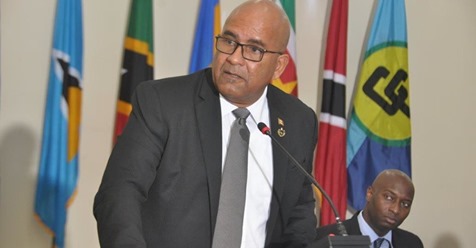 Foreign Affairs Minister, Peter David on Tuesday said that the 15-member regional integration grouping, CARICOM, remains committed to its policy of non-interference and non-intervention in the internal affairs of Venezuela, where the United States is pushing ahead with plans to remove President Nicholas Maduro from power.

Washington and its allies have identified Opposition Leader Juan Guaido as his replacement, but Maduro enjoys the support of Russia, China, and Cuba among other countries.

Last week, United States Secretary of State, Michael Pompeo, on a two-day visit to Guyana reiterated the position that Maduro should step down.

But speaking at a news conference here, David, who is due to take up a new portfolio on October 1, told reporters “CARICOM maintains its position with respect to Venezuela, non-intervention, non-interference in the internal affairs of Venezuela.

“We believe that maintaining the region as a zone of peace is of paramount importance to all of us. We believe the issues confronting Venezuela must be resolved by Venezuelans. We believe that the issue of regime change is not something that should be placed on the agenda of other countries and certainly all of CARICOM had agreed to that,” David said.

“And we hope that all of CARICOM sticks to that. We have had differences…but none of these differences rose to the level where any member said they would participate in the interference and the internal affairs of a member state of CARICOM and that of Venezuela”.

David said with respect to Venezuela “we hope that Guyana sticks to that,” adding if Pompeo comes to Grenada “tomorrow we will certainly welcome Pompeo, but Grenada’s policy is that we will listen and I hope that Guyana will do.

“They have a right to invite Secretary of State Pompeo, Presidents of other countries, but we hope that they stick to the CARICOM position which is non-interference in Venezuela’s internal affairs.

“Venezuela is going through some difficulties, there are things they may disagree with Venezuela on, but one thing we agree on is that Venezuela’s internal affairs is Venezuela’s business and therefore there should be no intervention and therefore we urge them to maintain the position of CARICOM, while they are free to have all types of diplomatic engagements and visits, please do not renege on the principle that this region shall be maintained as a zone of peace,” David added.

Following his meeting with Pompeo last week, Guyana president Dr. Irfaan Ali told reporters “we support and respect the need for free and fair elections in our hemisphere,” adding “with urgency we believe that the democratic values and principles should be respected in Venezuela as well”.