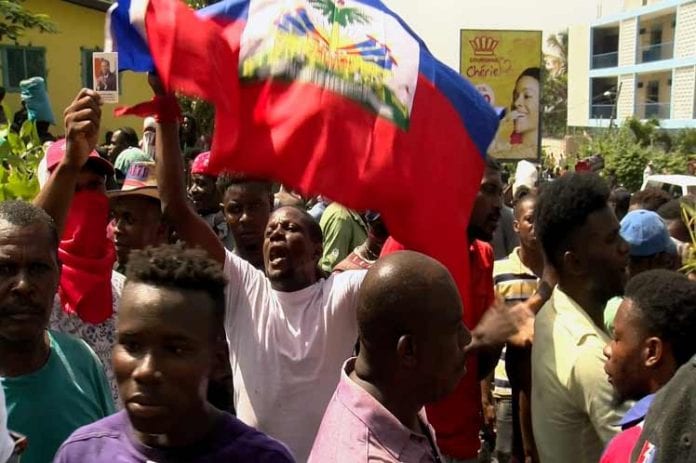 PORT AU PRINCE, Haiti, CMC –Opposition political parties in Haiti have rejected a call by the United States for all political stakeholders to put aside their differences and work towards “a peaceful and democratic solution” to the ongoing political and economic situation in the country where President Jovenel Moise is under increasing pressure to resign.

A spokesman for the opposition parties, André Michel, said the US Embassy and the rest of the international community must not continue to support Moise.

“The opposition has already launched seven days of national mobilization from Sunday 27 October to Saturday 2 November 2019 to force President Jovenel Moïse to step down.

“We are maintaining our schedule and (note) that the country will be totally closed during this period of intensive mobilization. We call on the international community to join the Haitian people in their fight for the satisfaction of their legitimate demands,” Michel said.

In a statement posted on the US Embassy website earlier this week, Washington said that it “continues to urge all of Haiti’s political, economic, and civil society stakeholders to enter without delay or preconditions, an inclusive dialogue to identify and pursue a path to form a functioning government that will serve the Haitian people and address the country’s pressing economic and social concerns”.

Speaking on a radio programme here earlier this week, Moise reiterated the call for a national dialogue insisting “I am not attached to a mandate.

“I am hooked on reforms. I want to talk about constitutional reform, for example. I want to talk about the reform of the energy sector, the digitization of the public administration. Today, we are in an acute crisis, but we can take advantage of this crisis to make this crisis an opportunity. We need stability in the country and to find that stability, we have to attack the system,” Moise told radio listeners.

In its statement, Washington said that Haiti’s leaders need to work together “toward a peaceful and democratic solution now, with an increased sense of urgency.

“The Haitian people are suffering; we stand with those Haitians who value peace while courageously calling for accountability. The United States deplores the current gridlock in Haiti which directly contributes to violence, a spike in humanitarian needs, and interruption of daily life for the Haitian people,” the statement added.

But Michel said reiterated that the opposition parties were now very determined to get Moise to resign and that from Sunday “the country will be transformed into a real battlefield.

“All roads will be blocked…it will be a decisive week,” Michel said.

Meanwhile, four opposition legislators, Evalière Beauplan, Antonio Cheramy, Ricard Pierre and Nenel Cassy, have called on their supporters to participate in the planned action from Sunday.

The four legislators had been linked to the disturbances that had occurred in the Senate earlier this month when opposition supporters stormed the legislative chamber ad part of the efforts to get Moise to step down.

Trinidad and Tobago Prime Ministers Since 1962 The First Dr. ERIC...