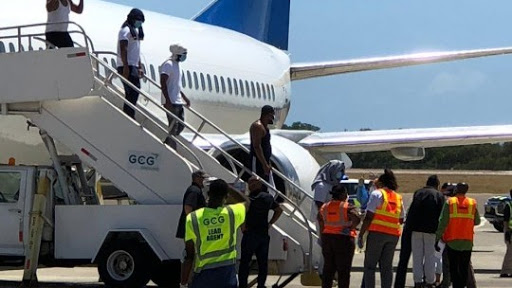 KINGSTON, Jamaica – Jamaica’s Health Minister Dr. Christopher Tufton has confirmed that one of the 46 deportees who recently returned from the United States has tested positive for the coronavirus (COVID-19).

The deportees arrived in the island last Tuesday (April 21). Over 60 Jamaicans had been initially scheduled to arrive.

Prior to being deported, the United States embassy in Kingston assured that all the deportees had been tested for COVID-19 “as the health, safety, and well-being of detainees in Immigration and Customs Enforcement (ICE) custody are among the US Government’s highest priorities.”

In a press release the week before the deported arrives in Jamaica, the embassy said, “It should be noted that the United States has taken, and continues to take, important steps to safeguard the health and safety of those in its custody, including during removal operations. As such, ICE does not remove aliens who are not fit for travel, including any detainee confirmed or suspected of having COVID-19.”

Tufton, when asked about the health status of the deportees during a recent virtual press conference on Monday , said the Ministry is still awaiting some additional information on the others, and “as soon as we have it, we will provide it”.

Jamaica now joins the list of Haiti, Guatemala and Mexico that have reported COVID-19 infections among migrants recently deported from the United States.

In the meantime, Prime Minister Andrew Holness, said the standard protocols are being observed to prevent any spread of the virus among the deportees, who are being quarantined in an area where they have their own room and bathroom.

He, however, indicated that the location where the deportees are being quarantined would not be disclosed nor will their identities, as there is an order in place for the identity of persons who have tested positive or are being tested for the virus to remain confidential.