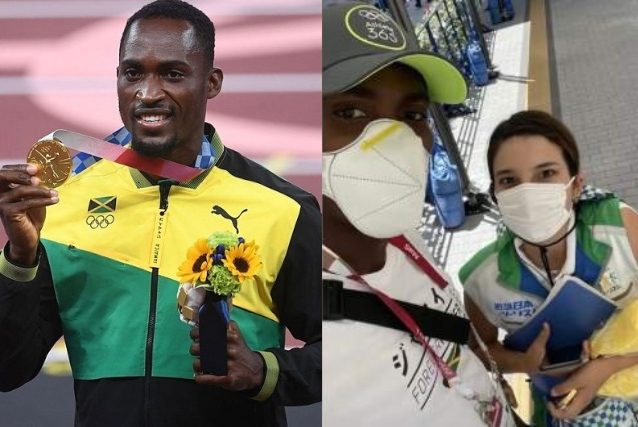 The Olympics volunteer gave the athlete taxi fare to get to the track and field stadium to compete in the final, after he accidentally boarded the bus to the aquatic venue.

Tourism Minister, the Hon. Edmund Bartlett in collaboration with the Embassy of Jamaica in Japan officially announced the offer during a virtual ceremony on August 18.

The offer includes a stay at the Diamond Club Butler Service Presidential Suite at the Royalton Negril Resort and Spa and the Iberostar Grand Rose Hall, Montego Bay.

In addition, the package for Ms. Kawashima and a guest includes a stay at the Moon Palace Jamaica, Ocho Rios and the AC Hotels Marriott in Kingston.

In his address at the virtual ceremony, Minister Bartlett noted that this act of kindness by Ms. Kawashima represents the best of the hospitality of the Japanese people and conveyed the gratitude of the Jamaican people.

“I salute you Ms. Kawashima, because you will forever be etched in the hallowed halls of Jamaica’s athletics history, because you helped the outcome which led to a gold medal,” he said, noting that the gesture represents the continued good will and cooperation between the two countries.

“The actions of Ms. Kawashima and the beautiful story with Mr. Parchment which impressed the world is (what really) represents the Olympic spirit,” he said.

The Olympic official expressed the hope of seeing this same spirit demonstrated in throughout the Tokyo 2020 Paralympic Games which will commence August 24 and ends September 5.

Ambassador of Jamaica to Japan, Her Excellency, Shorna-Kay Richards and Mr. Parchment who also participated in the virtual ceremony, warmly welcomed Ms. Kawashima and thanked her for her generosity of spirit.

Overwhelmed by the response she has received, Ms. Kawashima said simply that she did what she could to assist the athlete.

“I am very grateful for this. I just did what I could do… I am so happy for this,” she said.

To date, the short video of the heart-warming story which Mr. Parchment posted to his social media account has attracted 1,384,917 views and commendations from persons around the world.