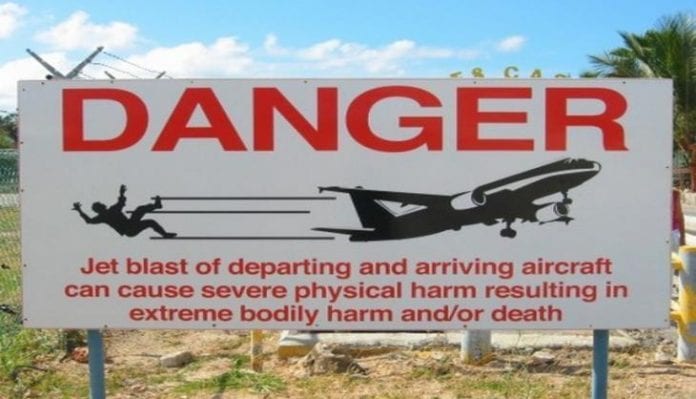 A 57-year-old woman from New Zealand was killed after the blast from a powerful jet engine knocked her to the ground at St. Marteen’s Princess Juliana International Airport.

The local police reported that on Wednesday, the woman was at the airport, which is just meter from the beach, when the force of the engines on a Boeing 737 coming in to land threw her backwards causing serious injury. She was rushed to hospital, but later died.

In a statement, the police said they visit the area daily to discourage tourists from clinging to the runway fence. “Landing and taking off of all types and size of aircraft at St. Marteen’s International airport is a popular tourist attraction,” police said.

“Many tourists come to the island to experience the thrills of the landing of approaching aircraft flying low above their heads. They hold on to the airport fence and stand in the jet blast of large aircrafts taking off. Doing this is, however, extremely dangerous.”

The island’s director of tourism, Rolando Brison, in an interview with the New Zealand Herald said he spoke to the woman’s family and offered condolences.

“I met with the family of the deceased this evening and offered the government’s condolences. They were with her at the airport fence. They recognized that what they did was wrong, through the clearly visible danger signs. They regret the risk they took turned out in the worst possible way,” he said.

The landing strip on the Dutch overseas territory is notorious as planes fly extremely low over packed tourist beaches. Despite prominent warning signs in the area instructing beachgoers not to stand near the fence because of the dangerous air blasts – the warning is often ignored.