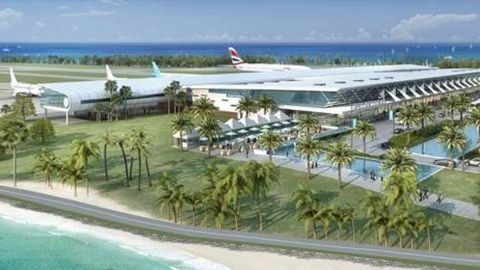 Bermuda’s controversial new airport terminal — a project pushed through by the previous One Bermuda Alliance (OBA) administration — is to open in early December, officials announced on Monday.

The terminal is scheduled to take its first flights on December 9 after “substantial completion” was announced by airport operators Skyport, contractor Aecon and the Canadian Commercial Corporation (CCC).

The new terminal will replace the nearby ageing one at L.F. Wade International which has been prone to leaks in stormy weather.

The next phase of completion, which started earlier this month, involves operational trials and tests on airport systems to make sure the opening day goes without a hitch.

The opening has been delayed by several months because of the coronavirus (COVID-19) pandemic.

“Achieving this milestone would not have been possible without the dedicated construction personnel who have proudly and tirelessly worked on the site for the past three-and-a-half years and to whom we extend our sincere appreciation,” said Skyport president Aaron Adderley.

“Over the past six months, the workforce, a majority of which were Bermudian, remained focused, even during a global pandemic and two hurricanes.”

A total of 885 Bermudians have worked on the site since construction started in 2017 and about 400 island companies got a business boost from the massive job.

The OBA announced in late 2014 that it had agreed a 30-year public-private partnership (PPP) deal with the Canadian government through CCC and Aecon, a Canadian contractor, to build the new US$250 terminal.

Then Finance Minister Bob Richards said Bermuda needed a new terminal but could not afford one because of the island’s unhealthy financial position, hence the decision to go for the PPP deal. But protests delayed the start of work on the project.

Police used pepper spray on demonstrators who blocked parliament in late 2016 in a bid to halt debate on the project.

Then Speaker of the House of Assembly Randy Horton adjourned parliament until the following February when legislators approved plans to build the terminal Work on the project finally got underway two months later.

While a dozen individuals involved in the protest, including union leaders Jason Hayward — now Labour Minister in the Progressive Labour Party government — and Chris Furbert, were charged with offences before the courts, the Director of Public Prosecutions abandoned the prosecution of all but two participants.