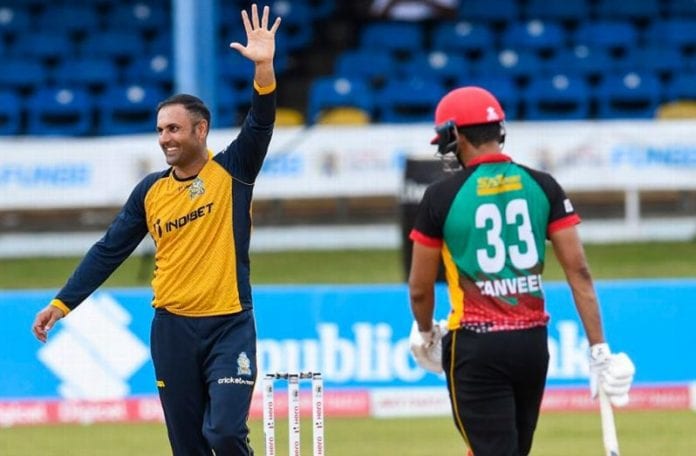 Mohammad Nabi sparkled with a maiden five-wicket haul as St Lucia Zouks took a giant step towards the semi-finals of the Caribbean Premier League with a comfortable six-wicket victory over St Kitts and Nevis Patriots on Thursday.

Choosing to bowl first at Queen’s Park Oval, Zouks limited Patriots to 110 for nine off their 20 overs, with off-spinner Nabi claiming a career-best five for 15 from his allotted four overs.

Australian Ben Dunk top-scored with a sluggish 33 and Alzarri Joseph chipped in with a swift 21 not out towards the end but Patriots never recovered after being reduced to 11 for four in the third over.

Afghan left-hander Najibullah Zadran then top-scored with 33 from 24 balls while Test batsman Roston Chase stroked an unbeaten run-a-ball 27 as Zouks eased to their target with over five overs to spare.

They lost a cluster of wickets at the top of the order to be 52 for three in the seventh over but Najibullah and Chased combined in a 47-run fourth wicket stand to put Zouks on the brink of victory.

Zouks are second on eight points following their fourth win in six outings while Patriots remain rooted to the bottom of the six-team table with two points from their five matches.

Zouks were given a dream start when Nabi wiped out the top order in a clinical spell, claiming the first four wickets to fall.

He got Chris Lynn to chip the third ball of the game back for a return catch without a run scored before removing Nick Kelly two balls later to a catch at slip also without scoring.

In his next over, the third of the innings, Nabi induced Denesh Ramdin (9) to hole out to deep square and then claimed the precious wicket of Evin Lewis (1) off the very next delivery, top-edging a sweep to Chase at short backward square.

Dunk tried to dig Patriots out of their hole, striking two sixes in a 37-ball knock as he added 27 for the fifth wicket with Jahmar Hamilton (9) and 24 for the fifth with Sohail Tanvir (12).

His demise in the 14th over, caught in the deep off-spinner Rahkeem Cornwall was a huge blow to Patriots’ hopes and not even Joseph with a couple of sixes at the end could get them score up to a competitive one.

Cornwall then gave Zouks a whirlwind start, blasting two fours and three sixes in an 11-ball 26 before a sharp shower drove players from the field.

On their return, Mark Deyal (0) and Andre Fletcher (16) perished cheaply but Najibullah and Chase came together to see off the timid Patriots challenge.