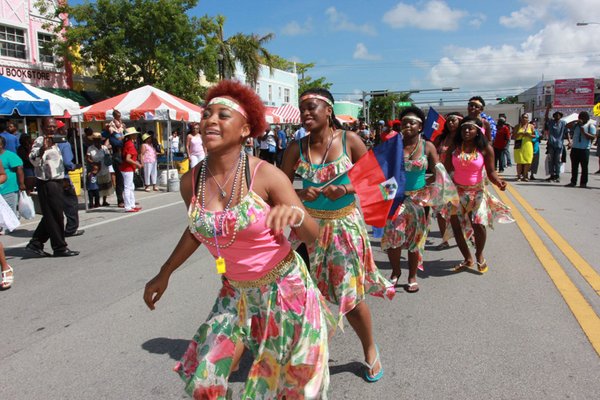 The Haitian-Caribbean Book Fair over the weekend brought in authors and publishers from Haiti and the Caribbean to the Little Haiti Cultural Complex, where the public was treated to author readings, workshops and cultural performances.

“It’s a success,” he said of the fair, “because the whole community is involved, not just Haitians.”

Miami Book Fair helped with the logistics and some of the programming for the event. Mapou said he’s excited that the Haitian-Caribbean Book Fair will join forces once again with the Miami Book Fair in November, where renowned Haitian authors will get exposure during the eight-day event.

“I remember when the Miami Book Fair started, it was very small, and now it’s one of the best and biggest literary activities in this country,” he said.

Mapou invited Father William Smarth, who flew in from Haiti, to speak at the event. The Catholic priest and professor is the author of Histoire de l’Eglise Catholique d’Haiti (the History of the Catholic Church in Haiti). He said the most important aspect of the Haitian-Caribbean Book Fair is that it brought people of all ages together.

“Many generations met,” he said. “Young Haitians were talking about their ancestors, and I think that is going to create some hope for the future of Haiti.”

Myrtha Roy, the main organizer of the weekend fair, said some of the special elements included a Children’s Corner, where kids created art around the stories that were read aloud, and writing workshops for adults.

“My goal in doing all of this, and putting so much effort as a volunteer, is to keep the Haitian-Caribbean culture alive. I believe in Mapou’s dream. God forbid he dies today; the culture cannot die with him. We’re trying to get the next generation involved.”

Publisher Jerry Delince has exhibited at the Haitian-Caribbean Book Fair for three years now. His family’s publishing company, Edition Delince, started in Haiti in 1967 and offers translated texts of classic books, in English, Creole and Spanish.

“I think it’s a great way to explore the ambiance of Little Haiti,” he said of the event, “and it’s a good primer on Haitian culture. There is no “Little Haiti” anywhere else in the world, so it’s a very good way to experience the cultural history — on a literary front as well as musically, with food, and it’s just so interactive.”

Dr. Juniace Senecharles Etienne wrote an advice book for parents whose children are about to enter college.

She says she wrote Three Steps to Guide Your Children’s Educational Future as a way for parents to start talking with their children about their education.

Author Alexandra Barbot, a native of Haiti who has lived in Miami for 14 years, wrote and illustrated the book Tell Me About Haiti for young audiences in English and in Creole. It’s about the history and folklore of Haiti.

“It starts with the history of the first inhabitants, the Tainos, or Arawak Indians, and this illustration,” she says as she points to a coffee-toned woman with long dark hair. She “represents the queen, Anacaona. Just like you have Pocahontas in America, we have Anacaona, and she was famous for being a dancer and a priestess. All over the Caribbean, she is very famous. She ruled one of the five kingdoms of the island [of Hispaniola] when Columbus came.”

Kids, parents and grandparents rummaged through bins of free books at the event, courtesy of the “Read to Learn Books for Free” program, a partnership between the Children’s Trust and the Miami Book Fair, which puts new and used donated books into the hands of families throughout Miami.

Marci Cancio-Bello, program coordinator for “Read to Learn,” says about 3,500 books per week are delivered to 40 bookshelves all over Miami-Dade County, from Homestead to Miami Gardens.

“It’s two-sided,” she says of the program. “We give out books and we also rely heavily on donations. We’re doing about 30 ongoing book drives at any one time.”