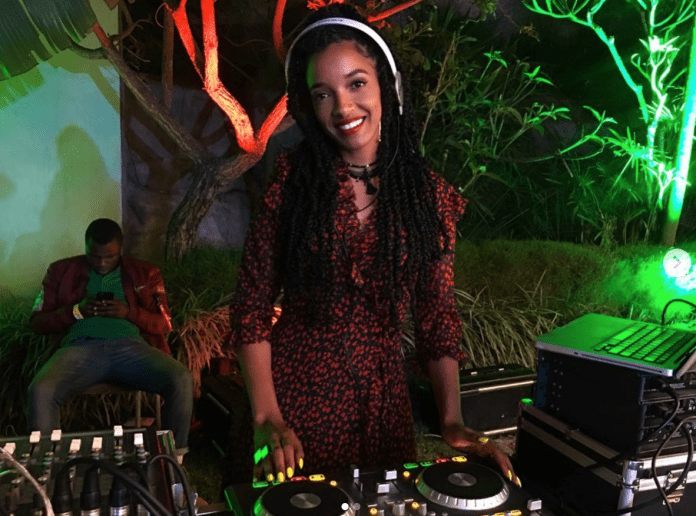 Effortlessly, and surely even unknowingly, Makeda Mahadeo is a powerful embodiment of the ‘reunion’ of Africa and the Caribbean.

She was born in the U.S. to Rastafarian parents—a Rwandan father and a Jamaican mother.

She was raised fully in Jamaica and completed her bachelor’s degree at the University of the West Indies in Kingston, where she studied literature.

It was while reading the work of African writers that she first became interested in the idea of Africa—a foreign land of which she knew she had direct roots, but up until then, had never even considered visiting. After all, she says, she hadn’t had much of a connection with her father as a youngster.

Eventually, reading African literature soon led to trips to South Africa, Ethiopia and the land of half of her ancestry—Rwanda.

In Rwanda, Makeda says she fell in love. First, with the place. But, then it was there she would also meet her husband. The rest, shall we say, is history. Makeda is now living and very much thriving in Kigali, the capital city of Rwanda, where she has become quite the celebrated public figure.

Her illustrious yet still-growing career in the public eye began as the host of The Switch, a popular local radio show. She also co-anchored and co-produced Rise and Shine Rwanda, a TV talk show. And, she was a celebrity judge on East Africa’s Got Talent, the African version of America’s Got Talent. Her most recent job was as an anchor at CNBC Africa. She’s also widely recognized as Rwanda’s first female DJ.

It all started, Makeda says, with her building an online presence by making Youtube videos to share her experiences in Rwanda with her mother, other family members and friends who were still living in Jamaica. “I had basically moved to the other side of the world, and my Mom always wanted to make sure I was okay. So, to keep her up to date about everything I was doing, I made YouTube videos. Other people started watching them to see what they could do in Rwanda, especially Rwandans across the diaspora.”

Despite living away for years and traveling back to Jamaica far less than she would like, Makeda has undoubtedly retained her Jamaican flair—with the accent and vibrant energy still fully intact. Reggae and dancehall music, for example, still pump through her online platform often. Surely her ‘Jamaican-Rwandan-ness’ has given her a distinct allure. She admits her Jamaican heritage intrigues Rwandans. “I mean, people everywhere think Jamaicans are cool and intriguing,” Makeda says.

Makeda’s rising success, however, cannot be attributed solely to her Jamaicaness. Passion, purpose and sheer drive are also fully active ingredients in the equation.

“I’ve loved to chat since I was a kid,” Makeda says laughing. “I’m doing what comes naturally to me—storytelling and music. I didn’t expect to become a DJ, that just happened. I wanted to go out and hear the kind of music I wanted to listen to. So, I began playing…I’m just driven by the love of what I do.”

The thing is, Makeda says, Africa is filled with boundless opportunities. It’s something she wants to broadcast far and wide, especially to her Caribbean counterparts looking to invest and build in budding new markets.

Kigali, as an example, is known for its progressive environmental policies, thoughtful political leadership and modern infrastructure. Rwandans are cultural, educated and worldly.

A marker of the country’s acuity, Rwanda has even maintained a steady composure throughout the pandemic. The response to COVID was quick and serious, she says. Once the Rwandan government lifted the more severe lockdown, extensive measures were put in place and cases dropped significantly.

“The leadership of Rwanda is quite forward-thinking. They’ve elevated the position of the country and are really focused on development. Rwanda is an incredibly safe and clean place. The 1994 Genocide Against the Tutsi in Rwanda stopped everything. That was only 26 years ago. But, since then, Rwanda’s growth has been exceptional. No one expected this kind of a comeback from such a small country.”

Makeda also believes that it’s unfortunate that most people around the world of African descent hold misconceptions about life in Africa. She points out that many Caribbean people are surprised at how comfortable they feel when they land on the continent.

“Africa is a giant, with many different countries. You can’t lump it all together, but the idea that a lot of people hold about Africa is outdated. To not consider traveling to Africa is a mistake. I’d encourage people to learn more about Africa. Africa is hot right now,” Makeda shares.

So, what’s next for this multi-talented, multicultural, global woman whose very essence is crossing barriers of artificial divide?

Although Makeda’s DJ career has been hit hard by the pandemic, and she only recently left her full-time gig as CNBC anchor, she has put her foot on the gas to accelerate the reach and growth of her platform as an independent content creator.

And, while she continues to make waves across East Africa, she has her sights on expanding further throughout the continent and hopefully breaking ground in the Caribbean as well.

“I’d love to connect those two worlds more, and I want to be in the Caribbean more, for sure. After all, you can’t cage a bird,” Makeda notes.