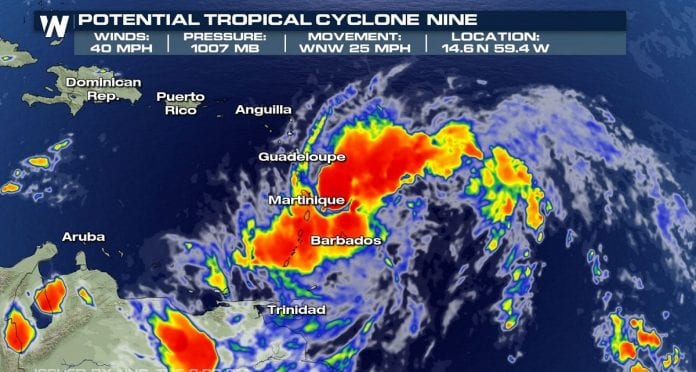 BRIDGETOWN, Barbados – Several countries in the Leeward Islands were shut down on Wednesday as tropical cyclone nine neared the island of Dominica, with maximum sustained winds of 45 miles per hour (mph).

The Miami-based National Hurricane Center (NHC) said that the system, which is five miles south of Dominica, is moving toward the west-northwest near 23 mph and this general motion with some slight reduction in forward speed is expected over the next few days.

According to the NHC, the maximum sustained winds remain near 45 mph with higher gusts.

“Some increase in strength is forecast today, with weakening likely on Thursday due to land interaction, and some re-strengthening possible late week,” the NHC said, adding that environmental conditions are expected to be conducive for additional development, and a tropical storm is forecast to form later today.

The NHC said that the potential tropical cyclone is expected to produce across the northern Leeward Islands, British and United States Virgin Islands, rainfall as much as six inches.

“These rainfall amounts could lead to life threatening flash flooding and mudslides, as well as potential riverine flooding,” the NHC warned.