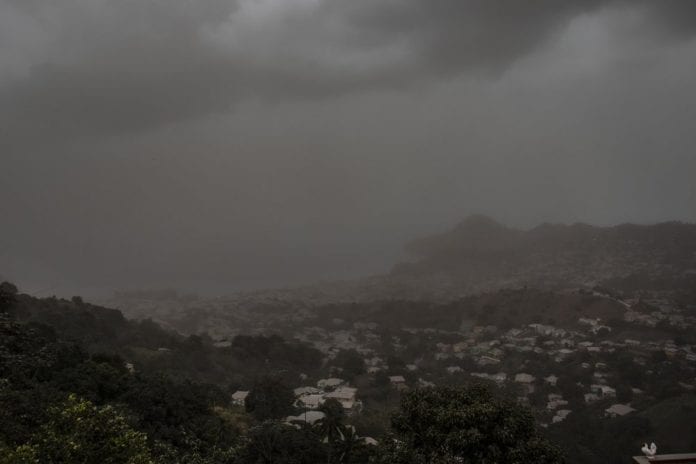 Volcanologist, Professor Richard Robertson is warning that while the explosions at La Soufriere volcano have been getting weaker and less frequent over the last two days, this does not mean that the eruption has ended.

“We are not convinced that the magma down here has all come up,” he said Wednesday evening on “Round Table Talk” on the state-owned VC3 cable channel.

“We are not sure how much [magma] it is and we are not convinced that it is completely up, that it is out, or that it has run out of steam,” he said, adding “It will take us a little while to be sure it is really ended”.

The volcanologist, the lead scientist from the Seismic Research Centre (SRC) of the University of the West Indies (UWI), monitoring the volcano, said that residents must remain on their guard, avoid the Red Zone and take steps to minimise the impact of the ash.

He said that the safe zones are expected to remain that way for the duration of the eruption.

The news comes even as Robertson and his team, as well as other professionals in the United Kingdom, had feared that the volcano had returned to “prehistoric” eruptions as occurred 15,000 years ago.

Such an eruption had the potential to turn St. Vincent into a “desert” Robertson said.

After 42 years without any explosive activity, La Soufriere blew its cap on Friday morning, three months after it began to erupt effusively.

The 8:40 a.m (local time) eruption came a mere 15 hours after authorities issued an evacuation order, having been advised by Robertson that the monitoring team could not say that the volcano would not erupt in 24 to 48 hours.

Since then, there has been between “at least 29 discrete explosions or ash venting,” Robertson said, adding, “that’s a quite busy volcano.”

He said that the last four discrete events took place over the last two days and, therefore, most of them occurred during the first three days of the eruption “when there was an almost continuous jetting of steam and ash.

“So it was quite busy Friday, Saturday, Sunday and it sort of reduced it rate.”

Roberson said that volcanoes develop patterns and at La Soufriere, it is almost as if the magma is in the chamber and “is trying to do something”.

The question is whether the magma contains enough gas to be jetted out. Therefore, the magma is moving jerkily in its attempt to get to the surface. As these jerky movements get more frequent, they then get bigger and produce tremors.

The size of the tremors increases and there is an exposition at the summit of either very gas-rich plume or one containing ash.

These explosions are usually called “Volcanian” explosions, Robertson said, adding that it is an event in which a plume of gas goes up into the atmosphere, often resulting in a pyroclastic flows because of a collapse in the plume column.

He said that such an event could be expected Thursday morning, in keeping with the pattern observed at the volcano.

The volcano is expected to sequence from explosion, quiet period, long period events (tremors) that get bigger, to explosions.This suggests that the gas-rich magma that gushed ash and steam for the first few days is now not so rich in gas.

The production of gas and how easily it comes out of the chamber, determines how fast or powerful, or quickly, material comes out and whether there is an explosion.

He said that the magma does not contain much gas and is finding it harder to come out of the magma chamber and is, therefore, solidifying at the top and trying to form a dome and that’s when there is another eruption.

However, each of the last four pulses has become progressively weaker, therefore, result in pyroclastic flow, which are extremely dangerous superheated volcanic material rushing down valleys.

Robertson said that it is not clear when exactly these events will stop, but there may be a period of quiet during which there might be emissions of steam, but this does not mean that the eruption has ended.

So far, the volcano has discharged over 70 million cubic metres of material into the atmosphere, 20 more than it did during the entire duration of the 1979 eruption.

Many Vincentians who witnessed the 1979 event have said that this year’s eruption is worse, in terms of the volume of ash that has fallen in their area, including communities in the Green Zone, furthest south of St. Vincent.

Robertson said that events over the last two days or so are similar to what occurred in 1979. What is different, though, is that this year, La Soufriere has not stopped venting.

There has been extended periods of activity in which the volcano produces ash that is so fine that it was being pushed high into the air.

In 1979, the “rocks” emitted from the volcano were larger and, therefore, did not rise as high into the atmosphere. In 1902, when the volcano claimed 16,000 lives, there were extended periods of venting of ash and steam, as is the case now.

Robertson said that this gives his team a little more comfort in that they can conclude that the volcano has not returned to a more prehistoric type of eruption.

He said that the yellow deposits seen in the cliffs in Colonarie and other parts of St. Vincent are from these prehistoric eruptions, in which the volcano was simply gushing out ash and steam for a long time.

He, however, said that in checking the records, his team concluded that the current eruption is also similar to the 1718 eruption, in terms of the intense period of activity, adding that unlike 300 years ago, things are better documented now.