Jamaicans are not xenophobic 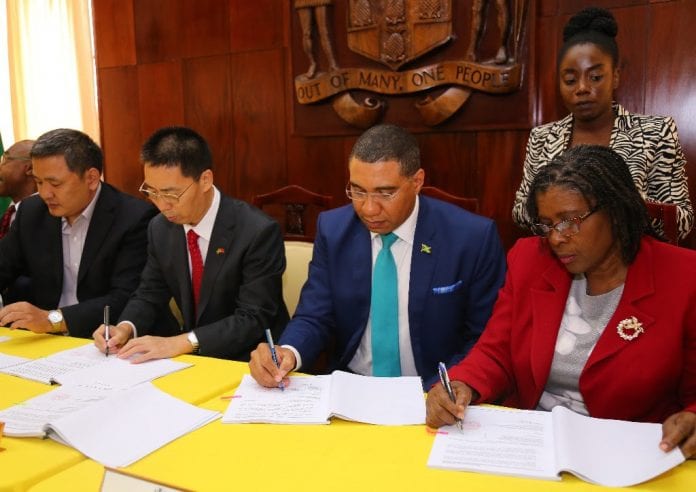 Jamaican Prime Minister Andrew Holness has sought to reassure Jamaicans that the Government will act in the best interest of the country while remaining open to foreign investment.

Holness gave the reassurance as the Government signed a partnership agreement with China Harbor Engineering Company (CHEC) on August 9 for the Barbican Road Improvement Works project.

He also noted the country’s relationship with the People’s Republic of China which dates back to 1972; and Jamaica continues to support the One China policy.

Holness outlined that as the largest provider of Foreign Direct Investment (FDI), China represents a window of opportunity for Jamaica to gain true economic independence.
We have to be receptive

“We have to be receptive to investments not just from China. Jamaica wants to see a diversified portfolio of investors coming into this country. We want investors from all over to come here and invest. We want people to choose Jamaica to invest; we want people to choose to make their homes in Jamaica and so the Government of Jamaica has, not just with my government but with the previous government and the government that I was a part of before that developed a strategic relationship and partnership with the Government of China,” he said.

Holness said the country must take a progressive view toward engaging foreign investment.

“I want to give you the guarantee that we are not wasting this money. We are leaving major legacies behind that your children can say that the engagement of your government with the People’s Republic of China left long lasting benefits that showed the partnership and the spirit of the engagement; because, as China develops and attains first world standard which they will do within a generation so too Jamaica wants to develop and attain first world standards and we can’t do it by shutting off ourselves from the world,” said Holness.