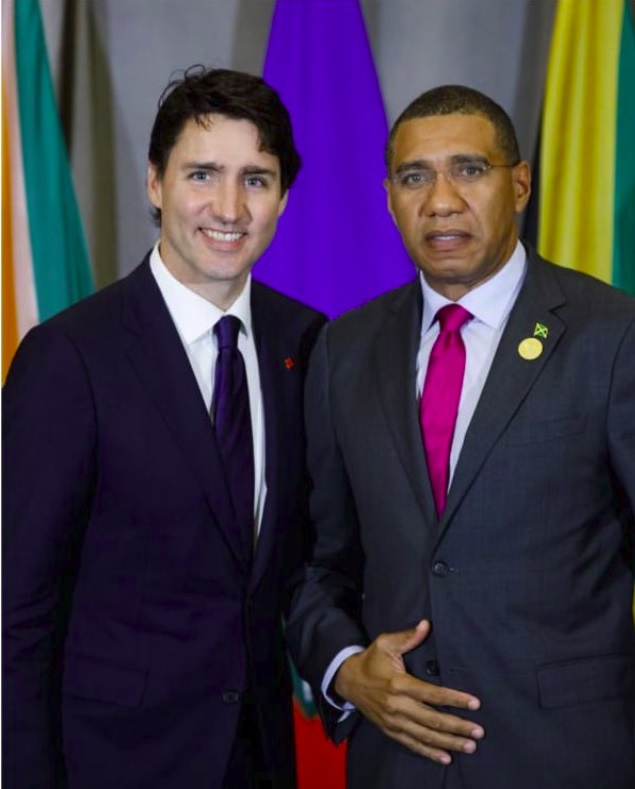 Although Jamaica isn’t a member of the extremely affluent international club known as the Group of Seven or more commonly the G7, Jamaica’s Prime Minister Andrew Holness has secured a special place at the G7 meeting to be held in Quebec, Canada from June 8 – 9.

Holness was specially invited to attend and address the Summit, which consists of Canada, France, Germany, Italy, Japan, the United Kingdom and the United States, by the Summit’s host and president, Justin Trudeau, the Canadian prime minister.

The Jamaican prime minister is scheduled to make a presentation to the global leaders, including US President Donald Trump. He will also participate in an exchange with the leaders at the summit.

First for a Jamaican PM

This will be the first time a Jamaican prime minister will address a G7 Summit. This week’s summit will focus on issues such as building resilient coasts and communities, ocean knowledge and science, and sustainable oceans and fisheries.

The leaders will also explore how to best address pressing challenges, including plastic in oceans and illegal, unreported and unregulated fishing.

The forum offers an opportunity for G7 leaders, ministers and policymakers to come together each year to build consensus and set trends around some of today’s most challenging global issues.

In Canada, Holness is also scheduled to hold meetings with  members of the large Jamaican Diaspora estimated at over 300,000m and Canadians today. At this meeting he was expected to promote investments in Jamaica, and bring the Diaspora up to date on economic growth and development in Jamaica.

He is also scheduled to have bilateral discussions with several countries, including Norway, Argentina, South Africa, and Kenya.

With President Trump having recently imposed trade tariffs against steel and aluminum imported from Canada, the European  Union, and Mexico, it is anticipated that the subject of tariffs could be prominent on the G7 agenda. The imposition of these tariffs is of particular concern to Jamaica as the country is poised to restart aluminum production and exports with the assistance of Russian and other international investors.

The chairman of the 15-member Caribbean Community (CARICOM) grouping, President Jovenel Moise of Haiti is also scheduled to attend the G& Summit on the invitation of Trudeau. Mise is not expected to address the group.