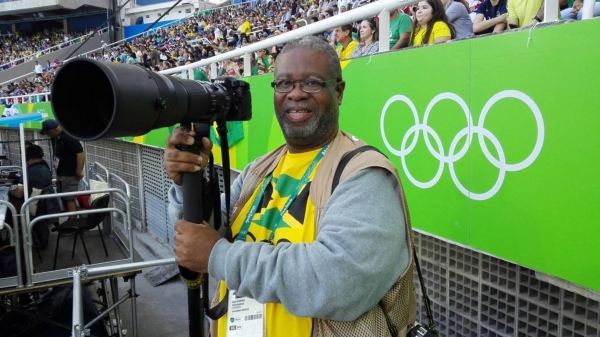 KINGSTON, Jamaica – Over the weekend, the Jamaican media fraternity was plunged into mourning following the death of veteran photojournalist and photo editor, Bryan Cummings.

Cummings, a decorated photographer who worked with the Jamaica Observer, died Friday, March 6, after a long battle with prostate cancer. He was 56.

Though he was born in Guyana, Cummings spent most of his life in Jamaica. He attended the Munro College, an all-boys secondary school in Jamaica, and represented the school in track and field.

In July 2012, Cummings and co-authors Hubert Lawrence and Michael Grant launched the book, The Power and The Glory, the world’s first comprehensive illustrated history of Jamaican athletics. The book contains pictures and speeches from as way back as 1928.

Following the news of his death, there was an outpour of tributes from politicians, members of the media and athletes alike.

The world’s fastest man alive, retired sprinter Usain Bolt, whose career was largely covered by Cummings, sent his condolences to the family of the late journalist. “RIP #BRYANCUMMINGS sincere condolence to your family”, Bolt wrote on Twitter.

In a similar fashion, Prime Minister Andrew Holness also sent his condolences, saying that Cummings was “one of Jamaica’s best”.

Via his Twitter, Holness wrote: “Sincere condolence to the family, friends and colleagues of one of Jamaica’s best and most decorated photojournalists Bryan Cummings. He captured some of the most memorable moments in Jamaica’s development for more than 25 years. His work will serve as a legacy for generations.”

The Minister of Culture, Gender, Entertainment and Sport, Olivia Grange, has expressed sadness at the passing of Cummings.

“Bryan was blessed with that eye that all great photographers possess. His enduring legacy will be his work in sport where, through his photographs, he told the story of a glorious period in Jamaica sport, particularly track and field.

“He was a well-respected photographer and editor, a kind and personable man, and I want us to hold up his family and friends in our prayers at this time,” the minister stated.

Bryan Cummings had worked with the Jamaica Observer since December 1994. Prior to that, he worked at the Jamaica Information Service (JIS).

While he was known for his coverage of sporting events, Cummings honed his craft by shedding light on numerous other aspects of Jamaican culture an development. The Jamaica Observer Executive Editor, Vernon Davidson said Cummings was a well-rounded photographer.

“While he distinguished himself as a sports photographer, he also provided our readers with excellent coverage of Jamaican life in the areas of news and human interest photography which not only added vibrancy to the newspaper’s pages, but also earned him many accolades at the annual National Journalism Awards staged by the Press Association of Jamaica,” Davidson said. In 2015, Cummings won the Press Association of Jamaica Award for outstanding news photography.