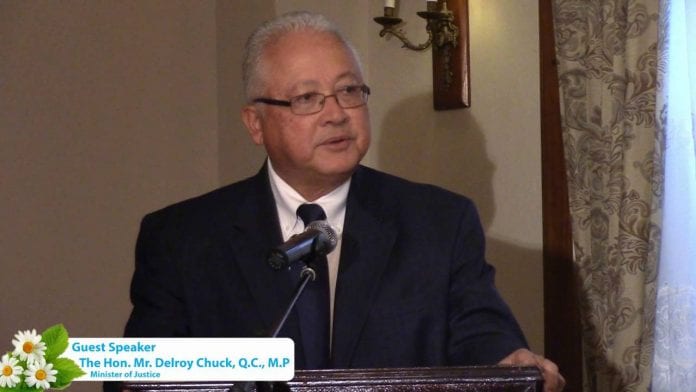 Justice Minister Delroy Chuck says the Government is working towards introducing virtual hearings and trials in the criminal justice system, as well as installing smartboards in lockups.

He said the installation of smartboards will facilitate the participation of persons in police lockups in virtual hearings and trials, without the need to physically transport them to court.

“We are working with the Ministry of National Security to have a smartboard in the prisons [and] in the jail houses. We have them in the courts now, so that accused persons can remain in the lockups and at the lockups they can see exactly what is happening in the courts,” Chuck said.

The Minister was speaking at the ceremony to handover office equipment at the Justice Training Institute (JTI) offices in the Corporate Area on Saturday.

The office equipment was provided by Global Affairs Canada to support training activities for Justices of the Peace.

Outlining the benefits of the pending technological upgrade for the justice sector, Chuck said the staging of virtual trials will lessen the administrative work in transporting accused persons, as well as minimise cost associated with transporting them from lockups to the courts.

“There is no need now for us to take accused persons for mention dates, for bail application and I dare say even for trial eventually, out of the jail houses or from the prisons with an enormous security back up. I am sure you have heard the sirens when prisoners are being taken from the GP (Tower Street Adult Correctional Centre in Kingston, formerly known as General Penitentiary) or district prison or from the police station to take them to court,” he stated.

He said while many Jamaicans are still getting accustomed to having virtual meetings, they will become the norm.

“At the moment, it is unusual, people are just getting used to it… Jamaica has to get used to it…it is going to be a major revolution especially in our courts because although we are improving the court system, it is clear that an enormous amount of savings can be obtained by doing things virtually,” he noted.

In the meantime, Chuck said the country is in possession of two buses that will enable witnesses to provide testimonies remotely.

“It is something that is being worked on…we have got full international support… and it is something that the Chief Justice is very strong (on) and (is) putting it together so that witnesses who feel scared or reluctant to come to court, we can now say ‘you don’t need to come to court if you don’t want to face your accuser again’. Many witnesses feel afraid to be in court because the friends of the accused will see them and they don’t want to be in court,” he said.

Chuck noted that these are important developments that will improve the court system and the justice sector.

Addressing the issue of the donation of office equipment, the Justice Minister expressed gratitude to the Canadian Government for their assistance in boosting the justice system.

“We look forward to even more cooperation and mutual benefit between both countries,” he said.

In her remarks, Canadian High Commissioner to Jamaica, Laurie Peters said her Government will continue to support justice reform and transformation related programmes in the country.

The JTI is a beneficiary under the social order component of the Justice Undertakings for Social Transformation (JUST) Programme that is funded by the Canadian Government.