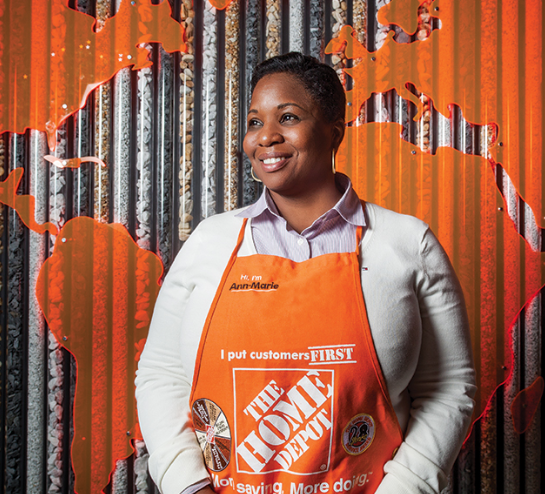 Campbell is responsible for the operations of all the Atlanta based company’s 2,000 stores in the US, the Virgin Islands and Puerto Rico, and nearly 400,000 employees, which makes up about a third of Home Depot’s $78.8 billion in sales.

The Kingston, Jamaica, native started her Home Depot career as a cashier while studying at Florida International University in 1985. She worked in functions ranging from operations to merchandising before landing in her current role, where she’s responsible for more than 100,000 staffers.

Ann-Marie learned her first lessons in retail from her grandmother in Jamaica, a successful retailer in her own right. And after more than 30 years with the company, Ann-Marie brings a deep understanding of The Home Depot’s operations, culture and customers.

In 2014, Campbell was ranked 38th on Fortune’s Most Powerful Women (MPW) in Business list.

Ann-Marie is a graduate of Georgia State University, where she earned a bachelor’s degree in philosophy and a master’s degree in business administration. She is a member of Beta Gamma Sigma, an international business honor society, and the National Scholars Honor Society.