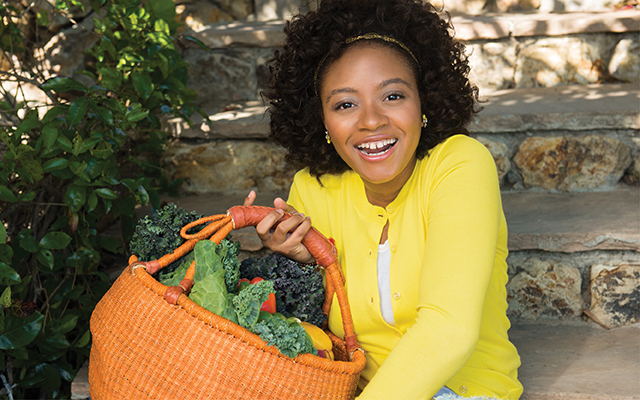 A soon to be 17-year-old Caribbean-American from New Windsor, New York, was on Friday night, Dec. 15th, presented with a CNN Young Wonder of the Year award in New York City.

Inspired to cook my Mom

Haile Thomas, who was born to Jamaican parents in Dallas, Texas, and was inspired to cook by her mother at the age of five, was honored as a teen health activist for leading the next generation toward a healthier future by bringing cooking lessons and nutrition education to children in underserved areas.

The teen is currently not just an activist but also a vegan chef, a motivational speaker and founder and CEO of The HAPPY Organization. Thomas says she began exploring healthier

cooking with her family, when her father was diagnosed with Type 2 diabetes in 2008. In 2009, she started a YouTube channel, Kids Can Cook, with her four-year-old sister Nia.

Thomas attended St. Gregory College Preparatory School but was later home schooled. In 2012, Thomas created one of the winning entries – a salad of quinoa, black beans, and corn – in the first White House Kids’ State Dinner, hosted by former First lady Michelle Obama as part of her Let’s Move! campaign. She also introduced the First Lady at the 2013 Kids’ State Dinner and later joined her at the 2013 State of the Union Address.

In 2013, the Jamaican-American founded The HAPPY organization, to bring nutrition education to youth through cooking classes, summer camps, and in-school programs. In 2015, Thomas began employment at the Canyon Ranch Institute as a nutrition science assistant.  In 2016, Thomas partnered with the non-profit organization Harlem Grown to provide education in urban farming, sustainability, and nutrition.

Thomas has served on the youth advisory boards for Alliance for a Healthier Generation and ChopChopKids, and as a Junior Chef Advisor for Hyatt Hotels. She has also given talks for TEDx, Deepak Chopra’s Sages and Scientists Symposium, The Clinton Foundation’s Health Matters Conference, Partnership for a Healthier America Summit, and the YWCA Women’s Leadership Conference.

Thomas has also appeared on The Today Show, Rachael Ray’s Kids Cook-Off, and The Dr. Oz Show as well as in Fortune, ‘O’, The Oprah Magazine, Teen Vogue and YES! Magazine.

Asked by Ripa about a vegetable she disliked, the teen said she could not name any but said the food she did not like are boiled Jamaican dumplings. “No offense to Jamaicans,” she added.

Thomas was among five Young Wonders honored along with 10 CNN Heroes of the Year at the 11th Annual CNN Heroes All-Star Tribute hosted by Anderson Cooper and Kelly Ripa on Friday, December 15th. She turns 17 on Dec. 23rd.