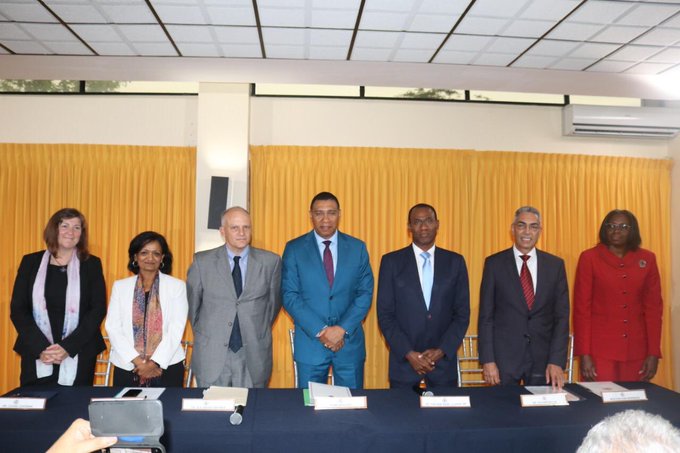 KINGSTON, Jamaica – As of Wednesday, September 18, Jamaica has successfully completed its borrowing relationship with the International Monetary Fund (IMF) after almost seven years.

At a press conference yesterday with the ministry of finance and members of the press, Prime Minister Andrew Holness announced that Jamaica has completed the final review of the three-year precautionary stand-by arrangement (SBA) with the IMF. The SBA began in 2016, following the four-year US$932-million extended fund facility (EFF) which started back in 2013.

Former Managing Director of the IMF Christine Lagarde sang the praises of the Holness-led administration upon the completion of the program. “Congratulations. Congratulations for six and a half years of partnerships with us, but more importantly a successful programme that has helped Jamaica and helped the Jamaican people. You owe it to yourself, to nobody else.”

Since the beginning of the SBA in 2016, Jamaica has seen the reduction of taxes, the implementation of a new tax-threshold that puts more money in the pockets of residents, a record low unemployment rate, a new high business confidence, and much more.

In 2013, then Prime Minister of Jamaica, Portia Simpson-Miller turned to the IMF to help the country recover from the global economic recession. Now, six years later, Andrew Holness is thanking the international organization for helping the country to re-establish economic stability. “This was a historic agreement which witnessed Jamaica taking responsibility for its economic choices and doing so in a collaborative environment with stakeholders which saw the formation of the Economic Programme Oversight Committee (EPOC), the Public Sector Transformation Oversight Committee PSTOC among others. As we end our formal engagement with the IMF, I want to acknowledge Madame Christine Lagarde, former Managing Director of the IMF for the encouraging and insightful message”, Holness said.

While completing the IMF programme is a significant economic milestone, Jamaica is now faced with the task of maintaining financial discipline in a post-IMF era. Prime Minister Holness said that with the shield of an IMF agreement no longer in place, the Jamaican government will now have to ensure that they are completely committed to making the best economic decisions for the country and its people.

“The real test, after this, with the IMF out of the room in some ways, is whether or not we can maintain and carry through the fiscal discipline that we have successfully committed to over the last 10 years.” He expressed confidence in Finance Minister Dr. Nigel Clarke, the ministry of finance and also the Jamaican people, saying that the culture of fiscal responsibility in the country has now become institutionalized.

But while Holness expressed confidence in his people, both himself and Lagarde acknowledge that the country does have a far way to go, especially with dealing with several national issues, such as crime and violence, now at crisis levels.

Lagarde said that with the country “now in a much safer fiscal position” will help the government better equipped to tackle crime and other issues. Jamaica will continue to benefit from technical advice from the IMF and their local offices will remain open for another two years.