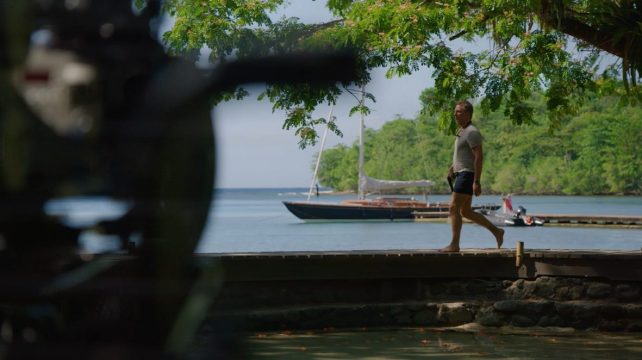 Jamaica, and specifically Port Antonio, will be showcased to an international audience as the James Bond film, ‘No Time to Die’ is released in major markets around the world.

The Jamaica Tourist Board also partnered with the film for its premiere on Thursday. They also released exclusive behind-the-scenes footage from the film.

The Jamaica Tourist Board has released some behind-the-scenes footage from #NoTimeToDie, a key location in the film. The island is also the birthplace of 007, where Ian Fleming created and wrote the Bond novels. #VisitJamaica #CaribbeanDreaming. pic.twitter.com/sygg4gMpoO

A large portion of the movie was shot in Port Antonio, the picturesque Portland capital, following the launch at Goldeneye in Oracabessa, St. Mary.

Captured are the colours and scenes of the country, including the green hills, white-sand beaches, blue tranquil waters, and the beautiful people, food, and music.

The owners of Geejam Resort, where members of the movie cast and crew spent six weeks of filming in April/May 2019, have been promoting the property and the parish as a famous movie destination, telling customers “If you’ve never visited Port Antonio can you truly say you’ve been to paradise? #NoTimeToDie coming to theatres soon!!!”,

But perhaps no one is happier to see the release of the long-awaited film than businessman Eustas “Piggy” Lindsay, who received support from the James Bond cast and crew to rebuild his jerk center after it was destroyed by fire.

“Our crowning moment was when the James Bond crew started coming night after night for our jerked chicken and we were generating publicity both locally and internationally,” he said.

“The entire film crew used to hang out here during filming of ‘No Time to Die’ in 2019, giving the place a lot of publicity… notably in the overseas press.”

Tragedy struck soon when the jerk centre was razed by fire, destroying four freezers, one standing fridge, a fan, and a stove, and putting the 15-member staff complement out of work.

“They were all extremely sad to hear about the fire and wanted to do something to help rebuild. They really wanted Piggy to get back on his feet as quickly as possible.  It was a lovely gesture,” Lindsay said.

“The assistance from the James Bond movie cast was very, very good. I will be forever grateful.”

The release of No Time to Die was rescheduled three times from the original April 2020 date, as theatres were forced to close their doors due to the pandemic.

The writer who created the James Bond character, Ian Flemming spent several years living on the island. His former home, which is now the GoldenEye Resort, is where he wrote 12 Bond novels and two short stories.

“I wrote every one of the Bond thrillers here with the jalousies closed around me so that I would not be distracted by the birds and the flowers and the sunshine outside…. Would these books have been born if I had not been living in the gorgeous vacuum of a Jamaican holiday? I doubt it,” Flemming said of Jamaica.