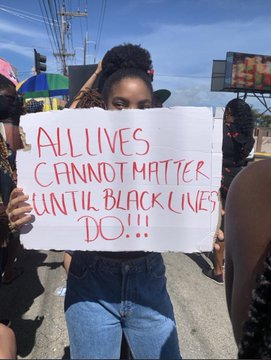 Jamaica has joined the long list of countries that have demonstrated their solidarity with the #BlackLivesMatter movement by protesting.

On June 4, a small group of Jamaicans gathered outside of the United States embassy to protest police brutality, both internationally and locally. While the protesters expressed their outrage over the police killing of black American George Floyd, they also cited Susan Bogle, the 44-year-old disabled woman killed by a soldier in August Town, St Andrew last week.

The four individuals were later joined by United States Ambassador to Jamaica Donald Tapia, who has endorsed peaceful protesting. According to the Jamaica Observer, Tapia’s presence seemed to surprise the protestors, whose numbers increased when residents of the Standpipe community, which is located across the road from the embassy, heard he was there and decided to join him.

On June 6, a larger and much more diverse crowd gathered outside of the embassy, with signs that read, “Black Lives Matter”, “Justice for Susan Bogle” and “White Silence is violence”. Black and white residents alike joined the protest.

In the vicinity of the Emanicaption park in Kingston, a second protest also took place. Residents blasted “Murderer” by Buju Banton over and over as they lined the sidewalk with #BlackLivesMatter signs.

In the meantime, Prime Minister Andrew Holness has assured that justice will be served for Susan Bogle.

During a virtual press briefing on May 31), Holness said he had reached out to Ms. Bogle’s son, Omari Stephens, to offer his deepest condolences and was moved by Mr. Stephen’s sentiment that he did not want his mother’s death “to go in vain or to be ignored”.

The Prime Minister said he assured Mr. Stephens that “in no way, shape or form, will there be any attempt to cover up [and] that we will seek to have justice done in this matter”.

He noted that the circumstances surrounding the shooting are still under investigation.