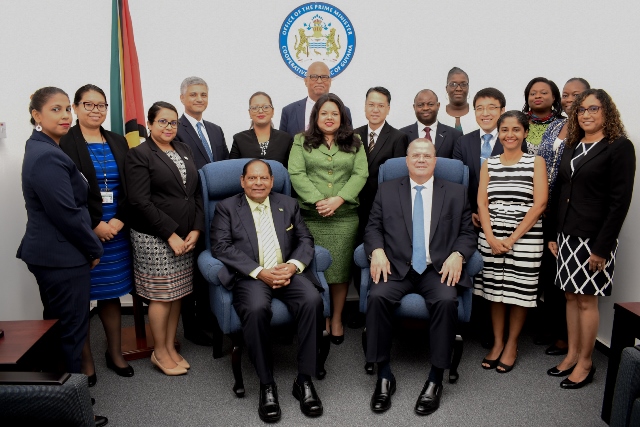 WASHINGTON, D.C CMC – The International Monetary Fund (IMF) has projected 4.4 percent economic growth for Guyana this year, stating that the medium-term prospects are very favorable for the Caribbean Community (CARICOM)-member state as oil production is on schedule to begin in early 2020.

The current account deficit is estimated to rise to 22.7 percent of gross domestic product (GDP) “on the back of higher imports related to oil production, which will be largely financed by FDI (foreign direct investment) in the petroleum sector,” the IMF said.

“The commencement of oil production in 2020 will substantially improve Guyana’s medium- and long-term outlook,” it said, adding that the oil sector is projected to grow rapidly, accounting for around 40 percent of GDP by 2024 and supporting additional fiscal spending annually of 6.5 percent of non-oil GDP on average over the medium term, “which will help meet critical social and infrastructure needs.”

The IMF said public debt and the external current account deficit are projected to decline steadily following the onset of oil production.

“The directors welcomed Guyana’s broadbased economic expansion in recent years underpinned by prudent macroeconomic policies,” it said, stating that the mediumterm outlook is favorable but highlighted that the commencement of the oil production “presents both opportunities and challenges.”

The IMF directors emphasized that “to ensure the effective use of windfall revenues, policies should focus on reducing macroeconomic vulnerabilities, addressing structural weaknesses, boosting inclusive growth and promoting intergenerational equity.”

The directors welcomed the authorities’ Natural Resource Fund (NRF) legislation for managing Guyana’s oil wealth and emphasized the need to complement it with a fiscal responsibility framework to avoid fiscal deficits.

They commended that the NRF’s framework aims to save some of the resource income for future generations and contain the pickup in public spending.

To meet these objectives, the IMF directors called for the authorities to constrain the annual nonoil deficit to not exceed the expected transfer from the NRF.

The IMF said this rule could be phased in over the next three years to allow “a smooth widening of the nonoil deficit (in relation to nonoil GDP).”

“Over the mediumterm, developing the infrastructure for greater exchange rate flexibility within the monetary policy framework would help sustain healthy economic growth while maintaining price stability and facilitating adjustment to oil price and other external shocks,” the IMF said.

The directors noted the continued progress in strengthening transparency and governance, and encouraged sustained efforts to implement the recommendations of the 2019 Extractive Industries Transparency Initiative Report, which would promote effective and transparent management of the oil wealth.

They also supported strengthening anticorruption frameworks, including by facilitating the work of the Integrity Commission to improve governance, support investor confidence and promote growth.

The directors noted that it is important to further improve the quality, efficiency and transparency of public financial management.

They recommended addressing the shortcomings identified by the 2017 Public Investment Management Assessment (PIMA) and expenditure review before public investment is significantly scaledup with oil revenues.

In addition, the IMF directors recommended an asset quality review to assess the credit quality of banks with high nonperforming loans.

They welcomed the progress made in implementing the 2016 Financial Sector Assessment Programme (FSAP) recommendations and encouraged completing the remaining ones.

The FSAP is a joint programme of the IMF and the World Bank. Launched in 1999 in the wake of the Asian financial crisis, the World Bank said the program brings together bank and fund expertise to help countries reduce the likelihood and severity of financial sector crises.

The FSAP provides a comprehensive framework through which assessors and authorities in participating countries can identify financial system vulnerabilities and develop appropriate policy responses, the World Bank said.

The IMF directors also noted the Guyanese authorities’ progress in strengthening the Anti-Money Laundering/Combating the Financing of Terrorism (AML/CFT) framework and called for further efforts in this regard.

“Priority should be given to address infrastructure bottlenecks and upgrade the education system,” they said. “In addition, promoting more flexible working arrangements could help increase female Labour participation.”

The directors underscored the importance of improving the business environment and enhancing competitiveness, and recommended putting more efforts into developing climateresilient infrastructure networks.