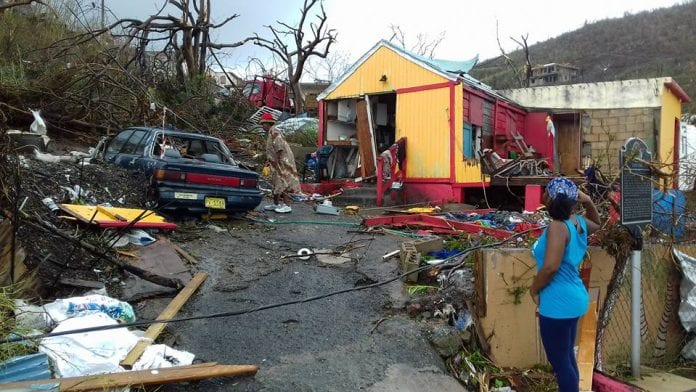 Hurricane Irma, one of the most powerful storms in history, ravaged sections of the British Virgin Islands as it ripped across the island chain late Wednesday.

Images have emerged of homes being flattened and several government offices destroyed.

According to Jermaine Smith, a Jamaican living there, the only thing he managed to save was his passport. “Everything mash up, everything, nothing saved,” Smith said in a video being circulated on social media.

Smith alluded to the loss of lives, but according to BVI News Online, there has been no official confirmation of deaths.

“You have people in buildings die and nobody can get to them. You have cars mashed up; all the houses have been ripped to pieces. Only thing I could have saved is our passport and our lives.”

Meanwhile, in the neighboring US Virgin Islands, its reported that the hurricane has crippled the only hospital on the island of St. Thomas.

“St. Thomas and St. John are pretty devastated,” said Stacey Plaskett, the Virgin Islands’ delegate to Congress in an interview with USA Today. She said the winds ripped the rood off the Roy Schneider Medical Centre in St. Thomas and the authorities have been evacuating patients to the island of St. Croix via helicopter.

She said that the 911 emergency system is down. Plaskett also said while most of the structures on the island met building codes for hurricanes, they could not withstand the strength of the storm.

“The storm is devastating to our economy. Our hotels have been damaged…. Getting those back up and running in a position where people will want to come and be tourists – will take some time,” Plaskett noted.

Earlier in the day the European Union (EU) said it was in the process of mobilizing its emergency response instruments to assist countries affected or threatened by Hurricane Irma.