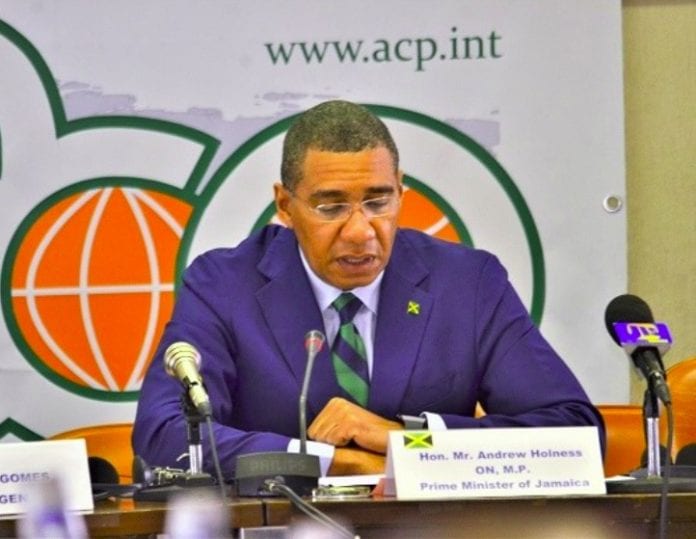 Jamaica’s Prime Minister Andrew Holness says Jamaica has taken seriously its responsibility to each state within the African, Caribbean & Pacific (ACP) Group of States council, noting that no state will be left behind in the process.

The Prime Minister stated that along with the CARIFORUM Group of states Jamaica represents, the Council is committed to promoting a process of collaboration.

ACP has accomplished much

“The ACP Group has a rich history and has accomplished much through its unity, strength and solidarity. Indeed, the Eminent Persons Group affirmed in its Report entitled, ‘ACP: A New Vision for Our Future’, that the ACP Group’s major strength lies in its ability to serve as a platform for its Member Countries to engage with bilateral and multilateral partners to secure sustainable development, inclusive growth and poverty eradication for its 1.1 billion people.”

Holness, speaking to ACP Ambassadors in Brussels earlier this week ahead of attending the Commonwealth Summit in London, highlighted the significant benefits of the ACP relationship which he stated has manifested at different levels.

The Prime Minister explained that the ACP must reflect and examine itself in order to remain viable.

“ACP Member States must commit to a process of reinventing and repositioning of the Group into a modern, fit-for-purpose, inter-governmental organization. Jamaica therefore stands ready to support a process of operationalization of the aspirations for a revitalized ACP, as outlined in the Policy document – “Towards the ACP We Want.”

He added that in the coming days the ACP, United Nations and the Commonwealth will meet to discuss key issues as well as to establish synergies.

“Undoubtedly, our efforts to address our common challenges will have the best prospects for success, if mounted from a united front. Together, we can engage Third Parties in meaningful dialogue aimed at changing, among other things, the criteria for development support, as well as for establishing international standards for growth, which have continued to impede our development process.”

The Prime Minister also reaffirmed Jamaica’s commitment toward the advancement of a renewed partnership with the EU.

“I encourage you to commit to open and frank dialogue in the spirit of friendship and solidarity that has been the hallmark of ACP partnership over more than half a century. Let us never abandon that invaluable collaborative framework, which has served us well in the past and will continue to be our guide, in the years ahead,” he said.