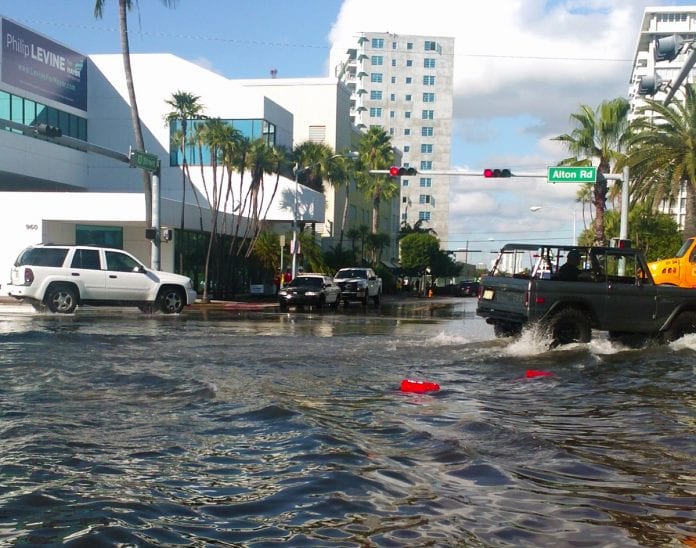 Last week speaking at a Hillary Clinton campaign rally in West Kendall, former US Vice President Al Gore emphasized the dangers of climate change, including rising seas on the coast of Florida Over the past weekend flooded streets and yards along the east coast in Miami Beach, Wynwood, Hollywood and Fort Lauderdale bore evidence of Gore’s warning.

For another year, the high tide called King Tide resulting from the full moon caused the flooding along the region’s coast.

Haitian-American Danielle Pigon who works in a small restaurant  along South Beach said on Sunday morning the tide had inundated the restaurant’s parking lot and its patio, forcing the owner to remove chairs and tables and close off the section from use by patrons. She said the flooding was worse on the streets along A1A east of Fort Lauderdale. “Driving home from work to apartment in Fort Lauderdale, the water along the road was several inches high above the bumpers. I could see the water flowing into people’s front yards.

The situation in the coastline in Miami Dade was made worse by steady rainfall on Sunday, which escalated street and yard flooding.

Forecast from the National Weather Service in Miami is that the flooding from the King tide could continue to mid-week. The weather service said the flooding was a combination of high tide from the full moon, swells coming towards the Florida south-east coast from Hurricane Nicole which impacted Bermuda last week, and winds blowing towards the shore.

Pete San Antonio a worker with Miami Beach Public Works department said the city turned on pumps on Sunday to pump rising water from streets, parking lots, and yards. However, some residents said while they were aware the pumps were activated the flooding prevailed. “Perhaps more powerful pumps are need,” Pegon said.