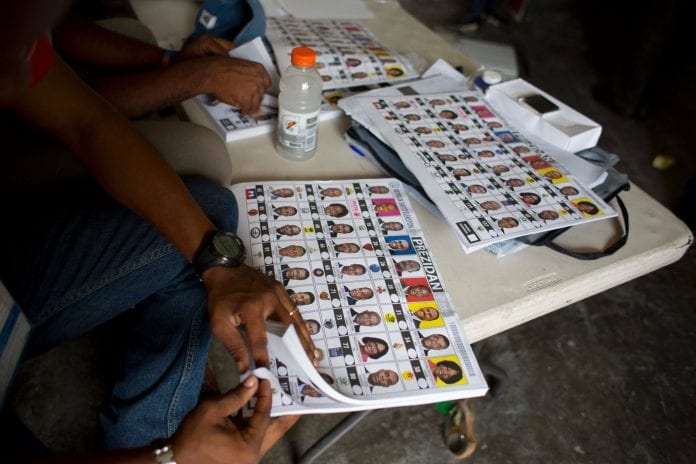 Haiti’s Interim President Jocelerme Privert has called on Haitians to a accept the outcome of Sunday’s vote for a new head of state, saying it is important for the country to emerge from the political instability over the years.

At least six million Haitians were eligible to vote for one of 27 presidential candidates, as well as for members of both houses of parliament in elections that had been repeatedly delayed for various reasons.

The presidential candidates included – Jovenel Moise, a plantation owner, chosen by the ruling PHTK (“the Bald Heads Party) and Jude Celestin of the LAPEH Party of former President Michel Martelly.

Celestin had placed second in the 2015 ballot that subsequently was cancelled.

The other candidates include Maryse Narcisse, who was a spokeswoman for former president Jean-Bertrand Aristide, who had endorsed Narcisse and encouraged his supporters to take to the streets in protest if her candidacy failed.

He said because of the importance of the elections “it is not for us the government, it is not for me that is there for a few weeks, it is not for the candidates, it is the victory of the Haitian people.
“So I ask all of you to contribute to enable the Haitian people to win this victory, so that once and for all, we would emerge from the political instability that is one of the main factors in which the country is today,” he added.

No official results are expected to be issued for eight days, and the Provisional Electoral Council (CEP) executive director Uder Antoine has said it might take longer than that.

The Anti-Fraud Emergency Center of the Ministry of Justice said it had already received more than 300 reports of fraud and that 80 per cent of the calls received were linked to the voting centers.

The police said that at least 13 arrests had been made during the polling on Sunday.